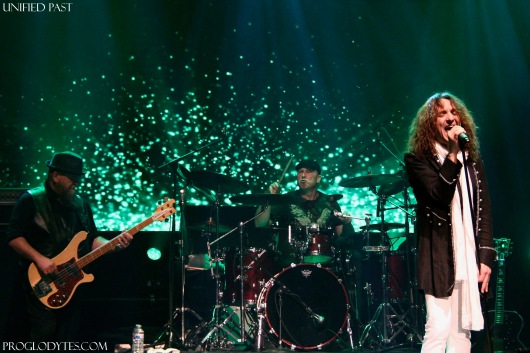 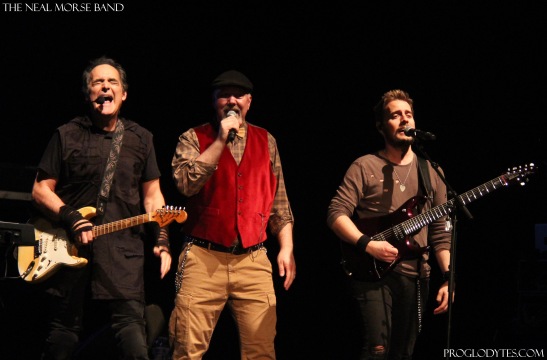 The anticipation was killing me.  It was the first weekend in May, and that could only mean one thing:  time for the road trip.  Destination:  Gettysburg, Pennsylvania.  Objective:  a serious dose of live progressive rock.  It was finally time for the internationally renowned Rites of Spring Festival.  For the past five years, my longtime best friend and I have made this pilgrimage every spring to hear a carefully curated line-up of some of the best prog musicians in the world.  In that time, the festival has become the center of my musical year. A chance to hear a mix of well-established bands—occasionally dating back to the original 70s prog heyday—alongside up and coming talent.

The full festival line-up included 10 bands at the historic Majestic Theater, with after-hours performances at the Aspire Hotel.  The remainder of this article provides day-by-day commentary.

The festival kicked off strong with the youthful exuberance of Kyros, a multinational group based out of the UK.  Having performed previously at RoSFest 2015 under the name Synaesthesia, the group returned to Gettysburg with a new name, image, musical direction, and guitarist in tow.  The new sound is more modern and edgy, incorporating more 80s and alternative rock influences.  Songs like “The Lamb, the Badger, and the Bee” show they still have an ear for prog, even if the lyrics come across as a bit naive.  Their latest album, Vox Humana, may appeal to fans of the recent Haken album, Affinity.

Friday’s headliner, Moon Safari, came a long way from Northern Sweden to play RoSfest for the third time—a distinction shared only by California prog veterans Spock’s Beard.  Having missed their previous performances at RoSFest, I was thrilled by the news of their unexpected return.  Moon Safari’s sound can be described as upbeat symphonic progressive rock in the vein of the Flower Kings, interwoven with sophisticated multipart vocal arrangements, occasionally venturing into a cappella.  As a six-piece outfit with two keyboardists, two guitarists, and shared lead vocals, these guys create a big sound.  It was impressive seeing them pull it off live, particularly some of the trickier vocal passages.

As a headliner, the group had more time to flex their musical muscles.  The set spanned their entire discography, excluding their debut album.  Highlights included the live debut of “Diamonds” (from the album Himlabacken Vol. 1), no less than three a cappella songs, and three as-yet unrecorded tracks entitled “1987,” “Emma (Come on),” and “Beyond the Blue.”  They revealed that they are working on a new album entitled Himlabacken Vol. 2 but gave no details on release date.  Moon Safari closed out the set with their 25-minute hometown epic “Lover’s End Pt. III: Skellefteå Serenade.”

After a late night at the Aspire Hotel with after-hours band Prog Nation, the festival continued with The Aaron Clift Experiment from Austin, Texas.  Instrumentation included a string quartet because, as we all know, everything is bigger in Texas.  Their set was marked by thoughtful arrangements, soaring guitar work, awesome violin solos, and plenty of epics.  If RoSFest was any indication, the experiment was successful.  (Interested in hearing more?  Check out our interview.)

Next up was another US act, Unified Past.  These guys have Yes in their DNA—going so far as to perform a tribute to the late Christopher Squire in the form of an extended medley of classic Yes songs arranged for acoustic guitar, vocals, and keyboard (but curiously, no bass.)  Lead singer Phil Naro—a relative newcomer to this band that dates back to the 90s—handled the lead vocals well, at times channeling Robert Plant and giving the group a classic rock sound.

The RoSFest website listed the next band as “Special VIP Performance,” leaving the artist to speculation.  Performing under the moniker U.N.I.T. dB, the band had at its nucleus singer Mark Trueack and keyboard wizard Sean Timms—the creative force behind Australian act Unitopia.  This was a rare opportunity to see Trueack and Timms reunite to play a set of primarily Unitopia music, since the group disbanded in 2013.  To fill out the line-up, they drew upon Timms’ bandmates from new outfit Southern Empire, with Danny Lopresto on acoustic guitar and Brody Green on drums.  They were joined by multi-instrumentalist Steve Unruh, who has played as guest musician for both Southern Empire and Trueack’s new project, United Progressive Fraternity (UPF).  Unruh played an impressive array of strings, woodwinds, and auxiliary percussion with virtuosic skill.  Set highlights included “Artificial” and “Tesla” from the Unitopia catalog, plus a version of the song “Intersection” by UPF (later re-recorded as “How Long” by Southern Empire) with Trueack and Lopresto sharing lead vocal duties.

Catching up with Brody Green between sets, he informed me that Southern Empire have been hard at work on the follow-up to their 2016 debut album, targeting a summer 2017 release… although he didn’t specify which hemisphere.  Excellent news for Southern Empire fans—and I for one will be at the front of the line when its released!  (Seriously, if you haven’t heard their debut album yet, check it out!)

The festival was already a tremendous success by the time Saturday night arrived—then The Neal Morse Band made it even better.  Neal’s collaborations with Mike Portnoy have produced some of the most compelling and critically acclaimed progressive rock of the past two decades: Transatlantic, Flying Colors, The Neal Morse Band… the list goes on.  Their latest release is the Christian allegory Similitude of a Dream.  Seeing the double concept album live in its entirety was a monumental experience, and the crowd was electric.  Christian or not, there are some seriously wicked licks on this album and they nailed them live.  Eric Gillette, Morse’s young guitar protégé, was a force of nature, tackling Petrucci-esque guitar licks with laser precision, all while contributing stellar backing vocals.

The realization of Similitude on stage was as epic as the album itself.  Neal assumed the role of the pilgrim, the story’s protagonist.  Dragons, sloths, ample wardrobe changes, and Neal running through the audience (as he is wont to do).  Their performance of Similitude was nearly flawless, and especially impressive given its grandiose nature.  Hilariously, just as the band was about to bring it home, Neal’s laptop shut down during the last song of the album, resulting in a long and awkward keyboard malfunction.  Donning reading glasses and dealing with technical difficulties, Neal’s prog god persona was transformed into prog grandpa momentarily.  However, the technical difficulties did nothing to diminish the crowd’s enthusiasm.  After an excerpt from Transatlantic’s “We All Need Some Light” to buy time, the band finished Similitude to roaring applause and closed out with an encore of “The Call” from 2015 album The Grand Experiment. 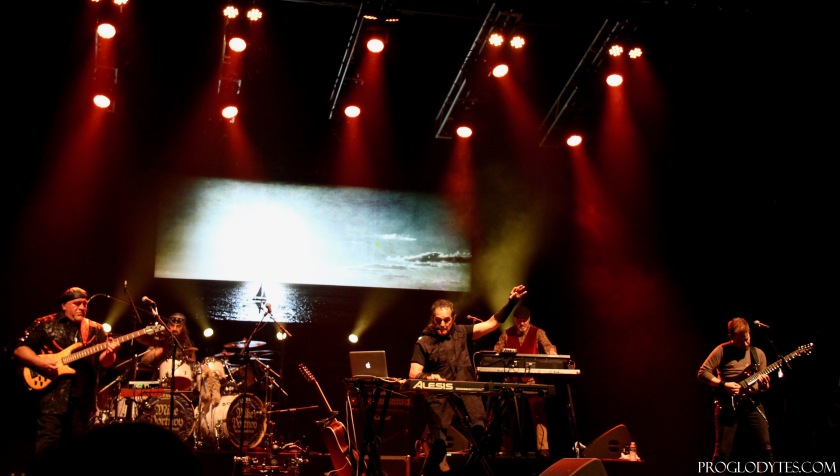 The opening timeslot on Sunday, known as the “church of prog,” went to UK post-rock act, The Fierce and the Dead.  The band use interlocking guitars to create mesmerizing instrumental rock.  The songs tended to be rather short and a little light on the prog, in my opinion, but the group’s entertaining banter between songs made for an enjoyable set.

Next up were prog newcomers Evership, and man did they fly high.  At the helm, surrounded by an arsenal of keyboards, was composer and multi-instrumentalist mastermind Shane Atkinson accompanied by his co-pilot Beau West on vocals.  Evership delivered excellent, theatrical prog anthems in the vein of classic rock bands Styx, Kansas, and Queen.  Having released only a single debut album, they filled out their set with faithful renditions of “Suite Madame Blue” by Styx and “Closet Chronicles” by Kansas.  As a bonus, they played an as-yet-unreleased track entitled “The Serious Room” slated for their next album. Hopefully Evership will embark on their second musical voyage soon!

By the time the next act took the stage, I was beginning to dread the inevitable end of the festival.  US act Edensong quickly made me forget all that and savor the moment.  Edensong plays heavy progressive rock with elements of progressive metal and folk.  Their sound is characterized by the use of aggressive flute playing throughout, courtesy of the incredibly talented Barry Seroff.  But make no mistake—this is no Jethro Tull knockoff.  These guys landed the slot immediately before legendary Änglagård for a reason.  With plenty of complex time changes and the occasional looping to fill out their sound, Edensong played an incredibly tight set.  I would go as far as to say these guys were the tightest band of the festival outside the headliners.

Closing out the festival, Änglagård filled the Majestic theater with their potent blend of vintage Swedish prog infused with jazz, classical, and a heavy dose of dissonance.  Hailing from Stockholm, Sweden, their music reflects the inherent contrast of a homeland that alternates between protracted snowy darkness and nearly endless sunshine:  beautiful and stark, manic and depressive.  After an extended hiatus, it’s exciting to have Änglagård back together performing live and (slowly) generating new studio material.  This is a band that I honestly never thought I would see live, so it was definitely a dream come true.  Seeing Änglagård live is about as rare as spotting a wild unicorn—and hearing them play Hybris start to finish is like watching two unicorns run across a double rainbow.

Änglagård gave an amazing show, pulling off their complex and often atonal recordings with perfection.  But they were also an enigma—both serious and whimsical.  In addition to flute and saxophone, multi-instrumentalist Anna Holmgren used all kinds of objects to generate a menagerie of sounds.  At one point, she played a variety of party favors before releasing Änglagård-branded balloons into the audience to bounce around.  She also played the most bizarre instrument of the festival, a Japanese (toy?) instrument I later identified as an Otamatone Techno from Maywa Denki.  The device looks like a big white musical note, with a touch strip to manipulate pitch and a smiling mouth on the note head to manipulate timbre.  While only the Japanese could come up with an instrument so bizarre, only a band like Änglagård could put it to legitimate use.

According to those close to the band, they are hard at work on a new studio album as a follow up to 2012’s Viljans Öga.  Let’s hope that they don’t take another 18 years between albums this time.

Thanks again to George and his dedicated team for making so many of my prog dreams come true this year!  You’ve set the bar high this time.  I can’t wait to see what you come up with for the milestone 15 year anniversary next year!  Two bands have been announced so far:  Barock Project, a neo-prog outfit from Italy, and Flor de Loto, a progressive hard rock/fusion band from Peru.

Couldn’t make it to RoSFest but feeling the festival bug?  Check out our 2017 Festival List to see what else is going on.  Hear from the masterminds behind the upcoming Progtoberfest and Progstock festivals.  And stay tuned for more festival coverage from Proglodytes!