This is the third installment of the Album Reclamation Project, in which a Proglodyte listens to an album that is either universally panned or highly controversial. To evaluate JUST how bad an album is, we use the Not Quite Trademarked™ Official Proglodyte Dumpster Fire Scale. In this installment, we are reminded that punk didn’t “kill” prog by itself- prog kind of helped. Here is the scale:

In the late 1970s, progressive rock had fallen to the fate so effectively illustrated in movies like Spinal Tap- once playing for huge arenas, these same bands by the late 70s were doing shows in dive bars and zoo amphitheaters. OK, that’s not entirely true, but the big progressive giants of the early 70s all felt they were losing steam and getting brushed aside by punk. Emerson, Lake, and Palmer, by 1974, were on a hiatus, and were pursuing solo projects. They united briefly during this period to produce Works 1-2, which achieved relative success, but were also written mostly separately. and didn’t quite feel up to par to their previous masterpieces. The band felt like they were losing steam, and by 1977 they had effectively broken up.

However, they were under contractual obligation to produce one more album. Enter Love Beach. Seeing not just the demise of their own band, but also the decline in interest in progressive rock, the record company and the band decided to take a different approach with this album. ELP had written massive, sprawling songs that took up entire sides of albums, but with love beach, they approached it with the mindset of ‘How can we put in the least amount of effort and get the most return?’ The three men were flown to the Bahamas to write Love Beach, with the legendary Peter Sinfield on lyrical duty.

Why People Hate It

The first people to hate Love Beach were Keith Emerson, Greg Lake, and Carl Palmer. The album was produced solely to fulfill a contractual obligation, and so this immensely talented progressive rock supergroup basically started the process with zero enthusiasm for the process. Every song speaks to the obvious truth that they’d rather be snorkeling in the gulf than performing the album. The music is overall totally bland, the lyrics (with a few very scarce exceptions) are completely uninspired, and the album as a whole just reeks of apathy. And even the album itself is instantly hateable- look at the cover! Palmer himself said that the band looked like :the Bee-Gees” on the cover. Peter Sinfield said of the lyrics of  Love Beach, ” I must say, they’re not the best thing I’ve ever written”. He agrees with the band that this album was their worst, and explained the process as extremely difficult, as he had to work with three massive egos that weren’t talking much during the writing of the album, and was being constantly pressured to produce. 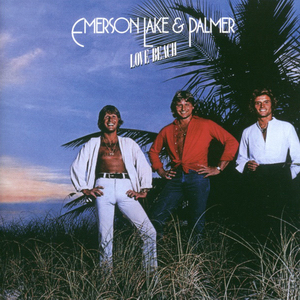 By the late 70s, everyone felt like progressive rock was gasping for air, and this album, even on first sight, screams ‘SELL OUT’. Every member of the band, including lyricist Peter Sinfield, despised the process and wanted it to be over. Lake and Palmer took off after a few weeks of recording, leaving Emerson to produce and deliver the product on his own. Despite the overall horror and disappointment from the band, the album still managed to chart at #55, and eventually went gold. ELP, the progressive giant of the early 70s, managed to hugely disappoint their fans, and without their progressive roots, they just came across as an average pop rock band with some interesting moments here and there.

Is it THAT bad?

I gave it a chance. And there are some neat musical moments, mostly found in ‘Memoirs of an Officer and a Gentleman’ and ‘Canario’, but yes, this album is mostly utter crap. It would have perhaps been an acceptable offering from a bland rock band with progressive tendencies, but not from three of the most talented musicians in the world and the brilliant lyricist behind The Court of the Crimson King. I’m with the band on this one: this album should have never seen the light of day (although ‘Memoirs’ and ‘Canario’ could have perhaps been released as an EP).  The ratio between potential and product makes this album all the more disappointing. So, my final assessment for Love Beach– it would be a Dumpster Inferno if it didn’t have the two aforementioned tracks, but because it has 2 above average songs in a noxious swamp of suck, I would say that is a Dumpster Conflagration.