It’s no secret that we at Proglodytes are big fans of John Mitchell’s work. John Mitchell might be one of the most active progressive musicians on the progressive rock scene. Whether he is playing with It Bites, Arena, Frost*, or his solo project Lonely Robot, or his newly formed record label, John Mitchell cannot be stopped.  In 2005, Mitchell, along with Pete Trewavas (Marillion, Transatlantic), John Beck (It Bites!), and Chris Maitland (Porcupine Tree), formed the band Kino and released the critically acclaimed album, Picture. Now, some 13 years later, Kino is set to release a follow up to their 2005 release, called Radio Voltaire. The latest album retains Trewavas, Mitchell, and Beck (as a guest musician), but features Craig Blundell (Steven Wilson, Frost*, Lonely Robot) on drums.  We were able to ask John Mitchell a few questions about the latest album, which will be released through InsideOut Music on March 23, 2018 (click on text to preorder).

John, you’ve been very busy with Lonely Robot, It Bites, Arena, Frost*, and numerous other acts and bands. What prompted the decision to get back together with Pete and make the new Kino record?

A suggestion by the label that now might be the time. I thought about it for 20 minutes and agreed. 🙂  Let’s see if the record buying public agree!

The title, Radio Voltaire, indicates that this might be a record that challenges social and cultural norms. Would you agree with that assessment?

Yes I would. Unfortunately my lyrics are so steeped in metaphor at times, it’s possibly not that evident. Pete is a lot more to the point than I am.

The album sleeve (which is very cool) was designed by Paul Tippett. Why did you seek out Paul as the album artist?

Because he did the first Kino album cover and every album cover I have made since. He’s always the best man for the job!

I think that perhaps this one sounds a bit more musically diverse than the first one but then again, Pete and I write melodies the way we write them, so similarities are always going to be evident. Sonically it probably sounds better, as I have better equipment to record on this time around. In 2005, my studio was a bit basic and Simon Hanhart did the best he could on the mix, but it wasn’t recorded particularly well.

Was the writing on this record more collaborative, or more separate?

The tracks that have been released thus far, “Grey Shapes on Concrete Fields” and “The Dead Club”, have very different vibes, with the former being more melodic and straightforward, and the latter flirting with psychedelia. Are the rest of the tracks equally as diverse?

Pretty much. It’s a bit musically schizophrenic, this album.

Craig Blundell, (drummer for Steven Wilson, Frost*), is playing drums on this album, replacing previous drummer Chris Maitland. Craig seemed like a natural choice, given your musical history of collaboration. How was recording with Craig different?

Chris Maitland likes perfecting his takes and making sure he is happy with them when he leaves the studio. Craig just likes to blast through as quickly as possible and leaves me with ‘footage’ from which to compile. Both ways of doing things are equally relevant as long as the net result is achieved. 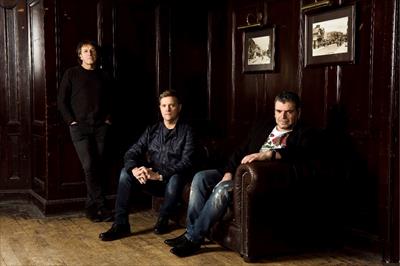 White Star Records just turned two years old! Tell us a little bit about what prompted you to open a record label, and what you see for White Star’s future. (Click here to check out their site)

Its madness isn’t it? Starting a record label given the downturn in purchased music is just crazy. For the record, it was Chris Hillman’s idea and my megalomaniacal ego couldn’t say no  We’ve got about 3 new released planned for this year and I’m always on the lookout for new exciting music to work with. To date, I haven’t made a penny from this adventure, but that’s not the reason I wanted to do it.

Check out Kino’s latest album, Radio Voltaire, which will be out next week on March 23rd, 2018!