Since concert reviews can be a little boring sometimes, I decided to take a bit of a different approach. I went and saw Marillion with some friends who have been fans of Marillion since the mid 80s, and I asked them to review the event with the perspective of a seasoned fan. So, this is a double review, featuring Thomas (live Marillion noob) and Ryan (Lexington, Kentucky’s “patient zero” for Marillion’s music).

I’ve been a fan of Marillion for almost 20 years now, but I haven’t ever seen them live. I really liked F.E.A.R. and was disappointed that I couldn’t catch them for that tour, and had also heard that they can’t always tour here in the USA, so I was actually pretty surprised and definitely pleased to see them touring the states again. We drove down to Atlanta, which is about a 6 hour drive, but with the help of well curated musical selections (that included a number of Marillion deep cuts) and good conversation, the trip went by relatively quickly. Well, according to me- I wasn’t the one driving (THANKS, RYAN!). 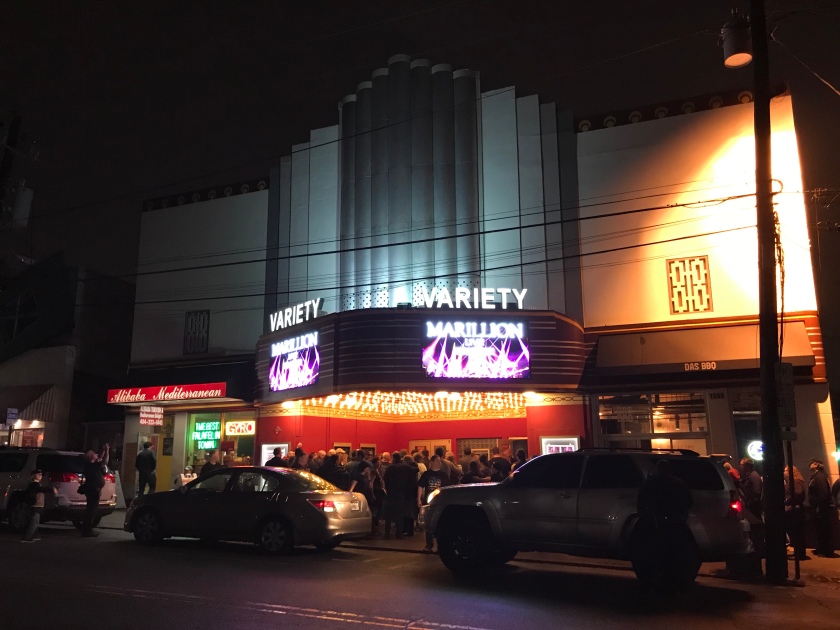 We admit that were surprised to see massive lines at the venue. We all looked at each other and said, “Are all of these people here for the progressive rock show?” It lifted our spirits to see such big crowds at a Marillion show, but Marillion is also well known for its supportive fanbase. I talked to some of the people around me, and wasn’t totally surprised to learn that many of the people around me had traveled 4+ hours to see the show. Marillion is a very well beloved band, and I was really happy to be in a crowd of die-hard fans.

I know Marillion fans don’t love it when setlists are posted, so I’ll avoid overt setlist spoilers. As a first timer, I would say that their song choices were not what I would have expected. Often when you see a band that has had several hits over a longer period of time, they make efforts to throw in all of their more popular songs. The band threw in a few of their biggest hits, but the majority of the selections were either taken from their latest album, F.E.A.R., or were longer, more contemplative fan favorites, I agreed with Ryan that I think this was a good move, because it seemed like the biggest applauses of the night were for either the newer material or the longer tracks that were played.

Seeing Steve Hogarth perform is a masterclass in how to be a frontman. As I’ve mentioned before, the skills required to be a good frontman are not the same skills that one needs to be a good vocalist. Hogarth was totally on point vocally, and delivered an incredible performance. But I was entranced by what he added visually to each song. Like an actor, he embodied the words to each song, and delivered them powerfully and expressively. I liked F.E.A.R. before, but seeing Hogarth emote and perform as he sang the lines made them make a lot more sense. I feel like that alone validates and justifies the concert experience. Seeing a band faithfully recreate an album track is one thing, but when the live performance adds depth and context to the album track, it elevates the music.

Also, in one of the most fascinating displays of audience trust that I’ve ever seen, Hogarth (who was playing rhythm to Rothery’s lead) took off his guitar and handed it, neck first, to the front row of the audience, who held onto it briefly and gently returned it to the stage. This act, I think, shows the powerful connection and trust that is shared between this particular band and their devoted fans. Ryan made the comment that this gesture really evoked the lyrics of “Living in F E A R”, which suggests that risking trust is actually less stressful and damaging than the conflict and isolation of perpetual fear. 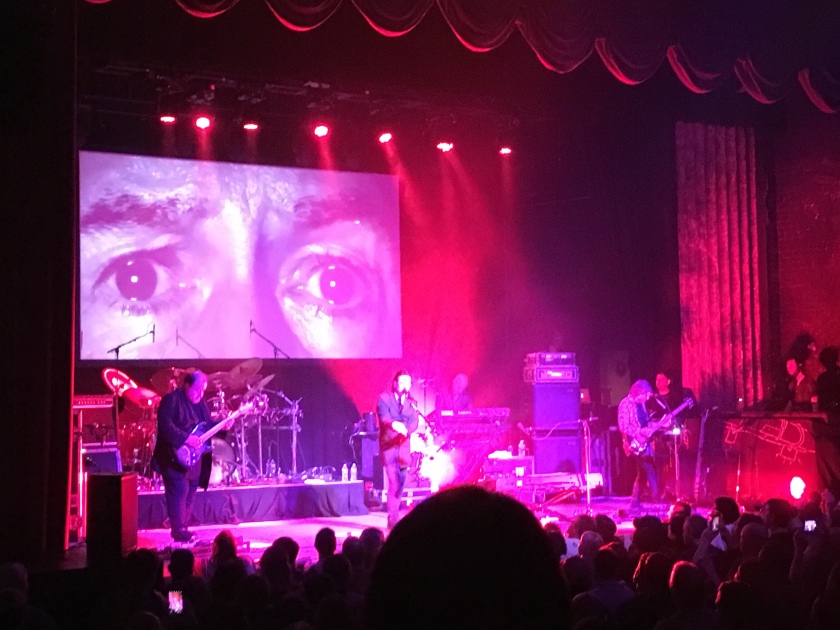 Musically, the band was terrific, and the sound was really well balanced. I was particularly reminded of how much I love Steve Rothery’s unique and expressive tone, and smiled every time he played a solo. Mark Kelly’s keyboard playing was powerful and dramatic, and the rhythm section (with Pete Trewavas on bass and Ian Mosley on drums) was in lock step with the backing tracks and video, which is a mark of true professionals.  Each band member had moments where they shined, and you can tell there is a level of musical comfort and compatibility on stage with these 5 gentleman that only comes from years and years of touring. There was a visual presentation that was projected onto a screen behind the band, and I felt like it added a lot to the performance overall.

My friend Natalie was adamant that I catch Marillion live, and made it a point to invite me to drive down with her and Ryan down to Atlanta to catch them. After seeing them live, I understand the hype, and will make an effort to catch them any time they come within a reasonable distance of where I am.  If you are able, I highly recommend that you do what you can to see Marillion, one of modern progressive rock’s most celebrated groups.

Marillion have come a long way from the days when they’d burn through five drummers between albums. Since 1989 they’ve been the same five amazing musicians, and perhaps more impressively they’ve continued putting out new and challenging music when many bands of a similar… vintage are mining their catalogs on tour instead of facing the diminishing returns from whatever remains of the music marketplace.

We saw this in action this month when they played in Atlanta, coincidentally for the first time since the tour behind 1989’s Seasons End, which introduced the version of Marillion that has endured ever since. The obvious move after such a long absence would be a “greatest hits” set or at least a broader overview of nearly 30 years of music (plus another half-dozen years from the Fish era), but that’s not what Marillion had in mind. 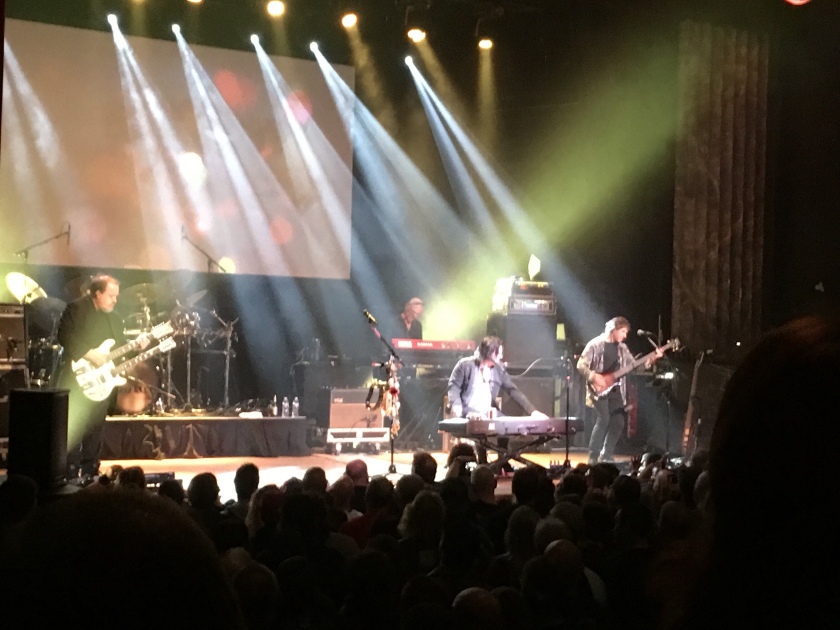 They are clearly and justifiably proud of 2016’s F E A R (Fuck Everyone And Run), the latest iteration of the singular sound they have been honing, and the most compelling in some time, with solid and provocative themes informing long, well-constructed song suites. The set in Atlanta was built around two of these suites: the opening “El Dorado” and the climactic “The Leavers,” which together made up nearly 40 minutes. (It’s a testament to the quality of F E A R that the remaining 17-minute suite, “The New Kings,” would have been equally worthy.) In addition, “White Paper” made a rare appearance outside of full-album performances. Highlights of the non-F E A R half of the main set included an effervescent performance of “You’re Gone” (a welcome change of pace in a set otherwise heavy on the majestic and epic side of the band), a storming “King,” and a warmly nostalgic “Kayleigh.”

Encores included the dramatic live staple “The Invisible Man,” which showcased Steve Hogarth’s astonishing vocals, and an absolutely transcendent “Sugar Mice” on which Steve Rothery unleashed the finest solo of a night full of inspired playing. All of this was delivered by a band that has long been impressively sleek and dynamic on stage, making their trademark quick transitions and layered arrangements sound effortless. This was not an especially accessible set (something like “Between You And Me” or an old Fish-era stomper would have rounded things out nicely), but it was very representative of Marillion in 2018, and the nearly capacity crowd at the Variety Playhouse made it clear with their huge ovations for the F E A R material that they were just fine with that.