Earlier this year, we had the pleasure to interview Roie Avin, editor of The Prog Report, about a new book that was he was putting together (You can read the interview here). The book came out late last year, and it’s been getting really positive reviews from the various progressive music sites. Here’s my humble addition!

I’ll include some context so I can be clear about any possible bias. I discovered progressive music as a kid through my parents, and then in the early days of the internet, began to discover modern progressive rock. Bands like Dream Theater, Spock’s Beard, Pain of Salvation, Transatlantic, Symphony X, and Devin Townsend formed the soundtrack of my daily life. I was completely and utterly obsessed with progressive rock and metal. AND…I lived in rural Kentucky. My family and I felt like we possessed a rare treasure that no one else had, and wanted badly to share with my friends. Unfortunately, as we started trying to introduce folks to the music we loved so much, we realized that it just wasn’t everyone’s cup of tea. I’d say to myself, “I know it’s good! I know there are people who love this stuff as much as I do!” So, I confess that it’s hard to be completely objective about a book that is so personally validating, as a celebration of the music that accompanied me through my teenage years into adulthood. But I’ll try.

I’ll start with just an aesthetic assessment- the book looks really nice and professional and slick. Sometimes books can look great on the screen pre-printing, and then upon print and release, things like picture resolution and coloring can get really botched, but this book looks great, especially considering that every chapter leads with an enlarged picture of the album art. A few of them are a little grainy,  but the pictures for the most part are really well placed and look fantastic. 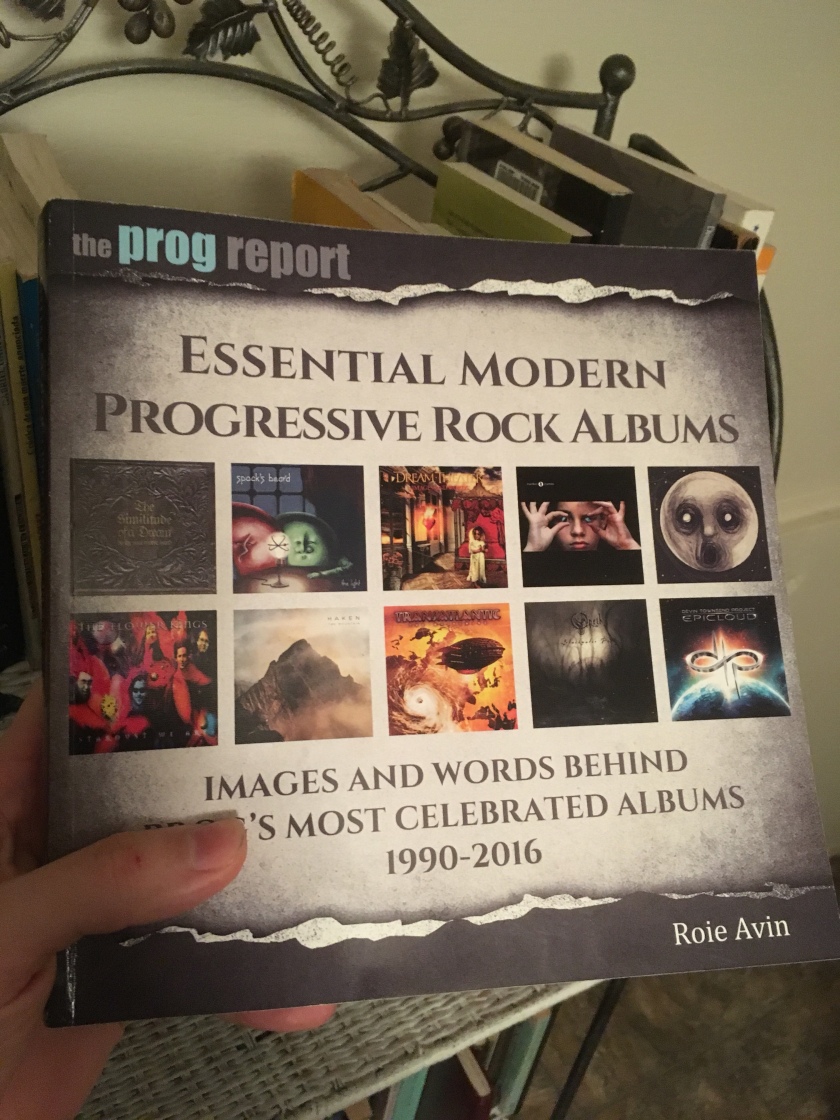 Each album profile is about 4-6 pages long. Roie includes the album cover, date of release, lineup, track listing, and label on every album. Every album includes text from interviews with band members, and provides some terrific context for how the albums came to be. In some cases, they include candid, modern reassessments for the albums that were produced. Not all of them are pure advertisement- one in particular that I’m thinking of involves Ted Leonard talking about the difficulties of singing on Enchant’s first album. But this context enriches the album history and makes for a really interesting and fun read. There wasn’t always tons of press for these albums, and though many of the bands mentioned did interviews with different outlets in a variety of mediums, they can be hard to find. So, major props to Roie for the countless hours of research that he did to make this book happen.

I’m not going to be the guy that takes issues with the albums that were chosen, because that’s pretty futile. “Essential” as a qualifier is pretty subjective, but many of these I would say are validated by their popularity within forums and discussion boards and mentions by fans and artists. As a teenager in the late 90s/early 00s, I was active on several of the big prog rock message boards and discussion forums, so I would say that, as an active participant in the conversation since about 1999, most of the choices from that period are justified as far as impact, for what that’s worth.

In the case that someone would take major issue with omissions, Roie included an extra section at the end for “More Essential Albums”, and it includes a few more albums that I might have included in the albums with longer profiles, but I can see why they were moved to that section. It includes albums like Tool’s Lateralus or The Mars Volta’s Deloused in the Comatorium in this section, which I assume were put there because, while they were very successful, they weren’t considered part of the same progressive “movement” like the other bands were, and frankly, they’ve been discussed all over the place, in printed press and otherwise. Other additions, like Kevin Gilbert’s masterpiece The Shaming of the True have enjoyed acclaim among those “in the know”, but for whatever reason, didn’t have the impact that some of the other albums on the list did. So, I appreciated the thoughtful addendum. 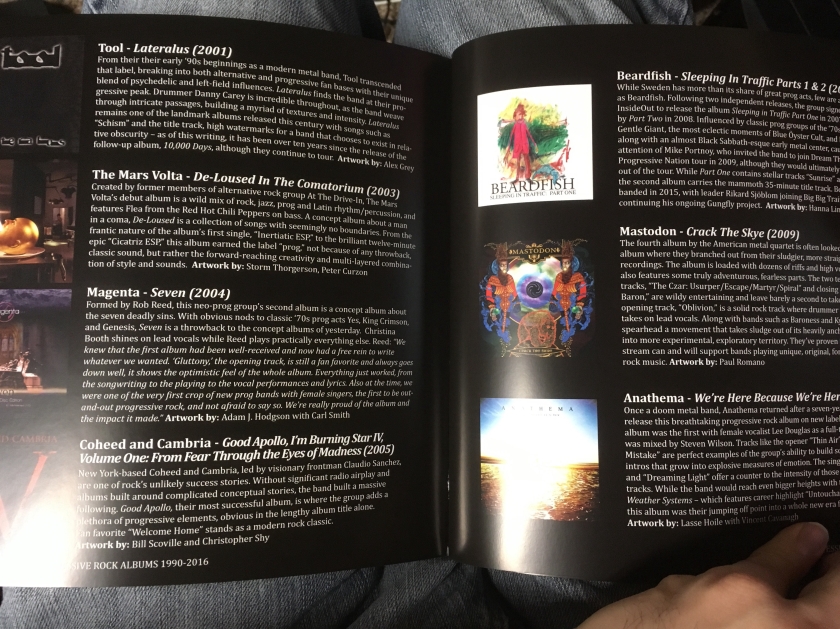 Also, I want to mention that I liked the decision to exclude bands like Yes, King Crimson, and others who were productive during the time period of the book but were already established and well known.  Yes’s The Ladder and King Crimson’s Power to Believe were tremendous albums, but I think this book has a very different focus and purpose. This book, to me, functions more as a primer or marketing tool for the modern progressive rock genre, so including bands that are already well established and successful would be counterintuitive.

To close, I really enjoyed reading this book. There are a few target audiences that would either enjoy or really benefit from this book. First group: The folks who are stuck in the past. I think it’s really sad and ironic when I see comments from fans of the prog juggernauts of the 70s that say that all of the best progressive music was written in the 70s by Yes and King Crimson and Genesis. I’d hope that a prog fan like that would read this book as a way to bridge the music they so desperately cling to from 70s and 80s to modern times. Prog lives on, and continues to progress! Second group: Modern prog fans. I’d hope a fan of modern prog could buy this book as a celebration of the amazing music that’s come out over the last 28 years. So many of these albums are very dear to my heart, and were formative in my development and as an artist and even a person. Third group: those new to prog. I think this would be an invaluable reference for a person who is new to the progressive genre and wants to catch up on the “must-listen” albums of the last few decades. I used to read through the books like Rolling Stone Rock and Roll Encyclopedia, back in the days before Napster and Youtube.  A guide like this would have been like manna from heaven for me.

If you’re reading this, whoever you are, go ahead and buy Essential Modern Progressive Rock Albums. You’ll love it.