Haken’s fifth studio album, Vector, was undoubtedly one of the most anticipated albums of the year. It’s not an overstatement to say that Haken has become one of the most important bands in the progressive metal genre,  with the success of their albums The Mountain (2014) and Affinity (2016). I saw them twice in 2017, and I remember thinking to myself that I hadn’t seen a progressive metal band that was as exciting as Haken since seeing Dream Theater in the late 90s/early 00s. So, needless to say, Vector had a lot to live up to

Haken often writes music with narratives and concepts, and Vector is no exception. Guitarist Charlie Griffith’s explained the concept of the album in an interview in their press release: “Musically it feels like a logical step from Affinity, but lyrically it’s a bit more theatrical and about as ‘rock opera’ as Haken has ever got. It’s about a Doctor with an intriguing, perhaps sinister interest in a particular patient. From there the story enters the point-of-view of the patient – who appears to be catatonic, but his mind is sparking with what could be memories, or delusions brought on by the treatment he’s receiving – we leave this up to the listeners to decide […] And that’s the challenge for the fans – to find out for themselves their own meaning for Vector as an album.” Source 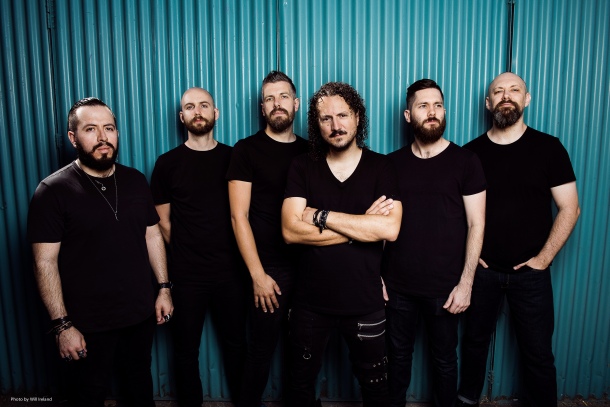 Vector still has a lot of the same elements as previous Haken albums- complex music, big, soaring choruses, pop elements- but this album in particular has a darker, more sinister tone. Following the ominous opener, “Clear”, the album opens up with “The Good Doctor”. Haken has never shied away from hooks, and this song is no exception. I especially love the heavier and more dissonant parts in this song near the end. Haken writes terrific album openers, and this one is no exception.

“Puzzle Box” was the first track that I completely fell in love with. I love the big, epic chords at the beginning, and the chorus is classic Haken. However, this song begins to truly shine for me during the midsection and the finale. The song tapers down a bit, as Ross sings over some really cool drum programming (provided by Peter Jones of Nested Shapes), but when it returns, it comes in full force, with crushing riffs and polyrhythmic vocal lines. I think this song might be my favorite on the album, and possibly one of my favorite Haken songs, but time will tell. It’s just a great representation of what makes Haken so great.

“Veil” is another track that took some time for me to get into. It is the longest track on the album, clocking in at around 12:36. In some ways, it’s just a great Haken song, with a lot of their trademark elements. But, it’s also full of surprises- one of my favorite moments on the album is the out-of-tune piano breakdown at around 6:30. Like “Puzzle Box”, it’s a very representative track for Haken, as it features killer riffs, catchy hooks, fast parts, slow parts, etc. I’m glad I invested in this song, because it definitely revealed itself to me after a bit.

If you’re of the belief that instrumental tracks are filler, you really need to hear “Nil By Mouth”. I could try and walk you through why this song is so great- the incredible rhythms, the heaviness, Ray Hearne’s AMAZING drumming- but you really just need to listen to the damn song. I hope this becomes a live staple, because it is seriously awesome.

“Host”, is a gorgeous, dark ballad, with an almost Opeth-esque feel to it. Album closer “A Cell Divides” is a natural single, with driving verses and a very singable chorus. It’s not hard to imagine Ross directing the crowd to sing along the “It’s the beauty of the fall/the grace of imperfection” part.

The verdict: I love it. But it took me a while to get there.

Several reviews have complained about the length of the album. Yes, it’s the shortest Haken album. But personally, I would prefer a short but concise musical statement without any filler over something that is unnecessarily long. Progressive music has long carried the stereotype of leaning into excess with reckless abandon. I am fine with the length of the album, but I can see why folks who were spoiled with Haken’s longer albums might be miffed.

I’ve also seen lots of reviewers, both armchair critics in comments sections and people with established sites, say that the album doesn’t break enough new ground musically. I don’t think it should be a necessary requirement for a band, even a progressive one, to completely and fundamentally reinvent their style every time they release an album. There is virtue in finding your sound and refining your songwriting abilities within that context. I don’t feel as big of a stylistic difference between Vector and Affinity as I did with Affinity and Mountain, though there were several things on the new album that took me by surprise. What I’m trying to say here is that it’s fine to refine style choices and create an identifiable sound,  rather than shift styles completely with every record.

I also feel the need to include how impressively technical the music is on this album. One of Haken’s greatest strengths is how their sound coalesces- with as many members as they have, this is quite an impressive feat. They are an airtight ensemble despite the intensity and complexity of their music. Everyone shines throughout, but I think Vector‘s MVPs are keyboardist Diego Tejeida and drummer Ray Hearne. Diego’s arsenal of sounds is huge, but he manages to find patches that compliment the music really well without being cheesy or taking away from the heaviness. I’m pretty opinionated about keyboardists in prog, but Diego is one of my favorites. And Ray’s drumming is mind-numbing, especially on tracks like “Nil By Mouth”. From start to finish, Ray shines (I’ll avoid the urge to use any light-based puns) with impressive chops and brilliant interplay with the other instrumentalists.

So, how does Vector compare/contrast with previous Haken releases? I felt like Affinity was stacked with single-worthy tracks (“Earthrise”, “1985”, “The Endless Knot”, “Initiate”, and “Red Giant”). Vector, however, is a much more cohesive musical and conceptual statement than previous Haken releases, though Visions comes close. There is a narrative, cinematic quality throughout the songs, one that is not so opaque that it’s confusing, but not so obvious that it’s cheesy.

On the point that Vector took a bit longer than previous albums to get into and understand: I had to listen to the entire album a few times from start to finish, and then listen to individual tracks to wrap my head around what the album’s trying to achieve. But, as it stands, it’s one of the albums I’m listening to the most lately (and as a reviewer, a lot of music is thrown my way, so that’s carries some weight), and it seems to be revealing itself more and more with each listen, which is the mark of a well-written record.

In short, Vector is dark, elegant, smart, and cinematic, and it stands as a worthy addition to an already incredible discography.

Vector was released on October 26, 2018 through InsideOut Music. Buy Haken’s new album Vector here, and make sure to catch them on tour with Bent Knee and Leprous if you can!