ProgStock Day 1 started with a bang! I had the honor of seeing things come together in the morning, and I’m fairly certain any of the people involved could run the government of a major city (although none of them would probably want to).

Jersey-based band Orpheus Nine kicked off the festival with tracks from their debut album, Transcendental Circus. Orpheus Nine is the brainchild of lead vocalist/keyboardist Jason Kresge. For being a relatively new band, they had a mature and tight sound, and Jason’s presence was electrifying and engaging. Jason’s voice and presence reminded me a little bit of Dennis DeYoung, or even Michael Sadler (who would perform later that night!). He embodied the songs in his movements and expressions. There were some stellar instrumental moments in this performance- particularly some mind bending unison runs between the guitars and keys. They ended their set with their 20+ minute epic title track from their album, which was complex and challenging and fun (and definitely featured some spooky clowns). It was an extremely proggy way to start the festival- that is to say, a perfect way to start a prog festival. 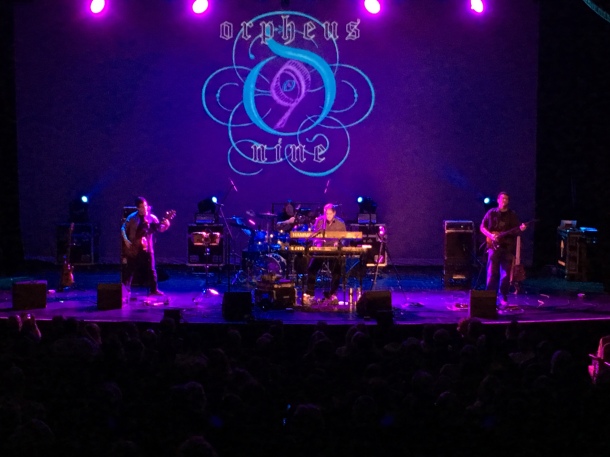 In case anyone wasn’t sure we were at a prog rock music festival: To introduce one of their songs, Jason mentioned that he had written a song about particle physics that included some quotes by James Joyce. As I said on our Facebook page- if I would have suffered some sort of amnesia halfway through the set, and would have come to right as that introduction was starting, I would have been able to figure out where I was by that description alone. Hey, if you´re gonna prog….

In Continuum was a highly anticipated act, based on the lineup alone. In Continuum features Dave Kerzner and Matt Dorsey from the acclaimed Sound of Contact, but it also features the talents of Gabriel Agudo and Leticia Wolf on lead vocals, Randy McStine and Fernando Perdomo on guitars, and possibly one of the greatest drummers alive, Marco Minnemann. In Continuum played music from their not-yet-released new album, Acceleration Theory, which is a sci-fi concept album that features several voices throughout. All of this music was new material, making its world debut at ProgStock. Though it had some stylistic similarities to SoC (hook oriented, upbeat) it also was markedly different in a number of ways. Having both Randy and Fernando on guitars was an absolute treat. Randy’s tight, precise shredding and Fernando’s raucous wailing were almost like a guitar yin-yang, and their solos and guitar work were definite highlights of the performance.

Marco’s incredible drumming was much more prominent than the drum work of Sound of Contact, and that is as it should be. If you have Marco in your band, you let Marco do Marco. He treated us to a jaw dropping solo about midway through the set. 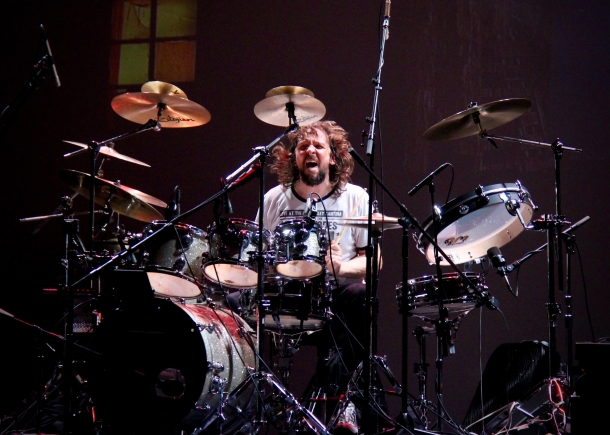 The second half of the set, much to the pleasure of the audience, was mostly Sound of Contact tunes. Other highlights: Michael Sadler joined the group to sing “Omega Point” and Joe Denizon played a terrific, face melting violin solo. 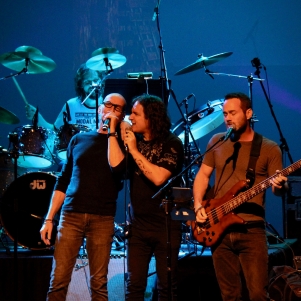 Legendary performer Michael Sadler took the stage next, performing with the absolutely brilliant Rachel Flowers on grand piano. One of the highlights of this set was an emotional performance of Moody Blues “Nights in White Satin”, which apparently had not been practiced beforehand- a fact that made it all the more magical. 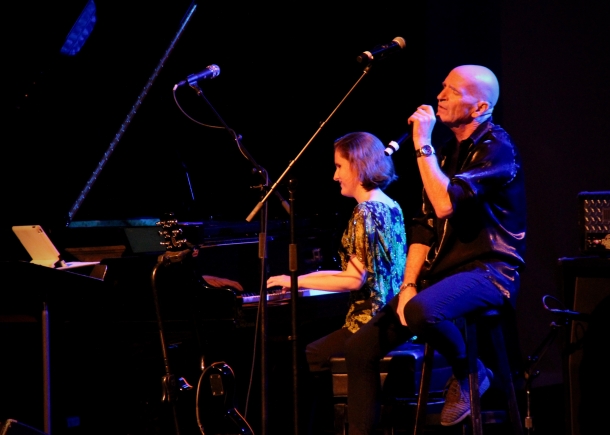 After Sadler performed an acoustic guitar duet with his son (which was incredibly endearing), Jimmy Keegan took the stage with several members of Enchant to perform a handful of songs from his long awaited solo album, which included “Chaos in the USA”, which had been released a few years ago. Jimmy and Ted Leonard’s voices blend really well, and the songs were really book driven and palatable. As a drummer who often ends up singing lead as well, I was really impressed with Jimmy’s ability to sing a really strong lead and do extremely complex drum parts. They closed their set with a solid rendering of “Bennet Built a Time Machine”, from Spock’s Beard’s album The Oblivion Particle and another song from Jimmy’s forthcoming solo album. 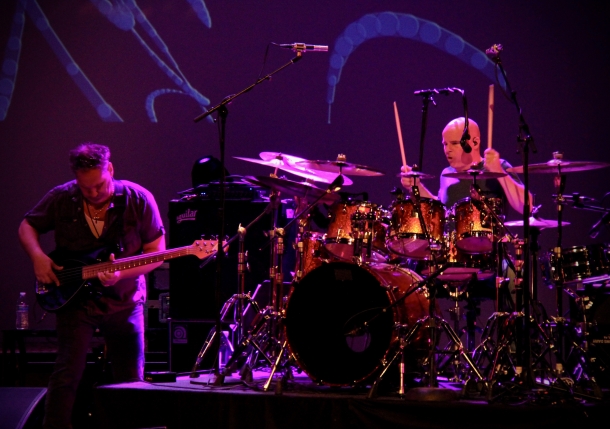 When Michael Sadler returned to the stage, he sang a combination of his own solo music and some classic Saga tunes, such as “On the Loose” and “Your Wildest Dreams”. Michael Sadler is a consummate performer, and watching him was a masterclass on how to be a frontman. He had the audience in the palm of his hand. His expressive voice and deliberate movements made him electrifying to watch.

Enchant (with Jimmy on drums) played terrifically and seamlessly as the backup band, which just made me all the more excited to see them on Saturday. At the end of his set, he invited Dave Kerzner and Fernando Perdomo to join him to perform “You and the Night”, which was breathtaking.

After Michael Sadler finished his set, we headed to The Waiting Room to catch the late night acts. First up was Dark Beauty, a gothic-influenced progressive rock band. Lead singer Liz Tapia has a powerful, operatic voice and a commanding presence, and the darker, heavier music provided an interesting contrast to the cheerful, poppy mantra of Sadler earlier. The musicians in Dark Beauty also were quite good- I was happy to see Katie Pachnos playing harp along with the piano during the set, and and Bryan Zeigler had some great solos.

Rachel Flowers took the stage next. Rachel was easily one of the highlights of the festival last year, and this year was no different. Rachel player a few tracks from her new album Going Somewhere. These tracks were so well written and performed I thought they were Stevie Wonder covers. Rachel played intricate, thoughtful songs with soul and tenderness. Seeing her play, without hyperbole, fills me with hope for humanity.

Steve Unruh finished off the night with an utterly captivating set. He performed at ProgStock 2017 with his group Resistor, and returned for the after hours event. Steve is a force of nature- a skilled musician on several instruments. Steve’s set up consisted of an acoustic guitar, a suitcase bass drum and portable snare/tambourine, a flute, and a violin. He played a variety of different songs that ranged from brooding folk to introspective new wave. The final song was an extremely catchy song called that featured Phideaux Xavier on guitar and vocals.

After they ended their set, we all collectively realized how late it was and headed home. Day 1 was a brilliant day of prog- stay tuned for our review of Day 2!