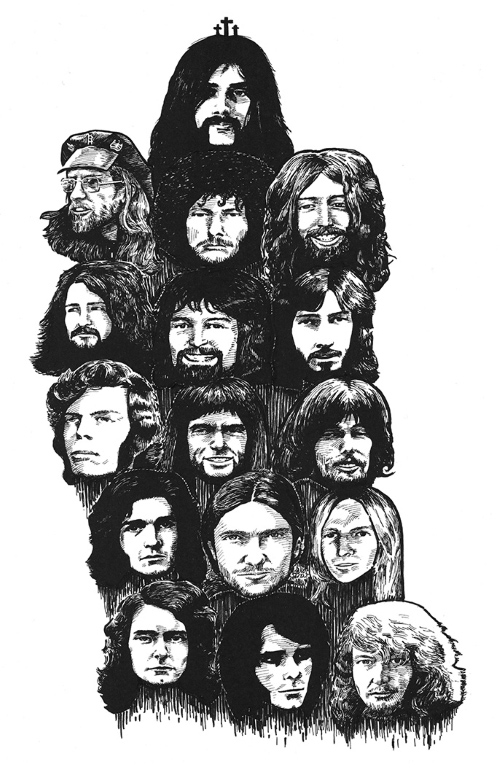 Charles Snider’s Strawberry Bricks Guide to Progressive Rock is essential reading for any fan of classic Progressive rock. The book is over 600 pages worth of prog rock history, interviews with fundamental and important progressive artists, and hundreds of concise, excellent album reviews. I first heard of Charles Snider when I cited him heavily in a paper I wrote in college on progressive rock, and I’ve been a fan ever since. I had the honor of asking him a few questions about his book (which can be purchased here).

How were you first introduced to progressive rock?

Believe it or not, but Roundabout was an AM radio hit in 1971 or 72. I remember hearing it and loved the song. You know, radio was such an important part of music in the 60s and 70s, it’s how music was discovered. People make a lot of fuss about streaming and Spotify and all that, but isn’t that just an advancement of radio? Anyway, our family car had an AM radio, while a console stereo in the basement had an FM dial. In fact, a typical science project would be to build a crystal radio!  So maybe a year or two later, my sisters gave me Yes Fragile for my birthday; I was hooked! I’d been listening to records as long as I can remember, especially The Beatles, but Fragile was the first record I could call my own.

Tell us about the history of the Strawberry Bricks Guide to Progressive Rock. Where did the name come from?

I had (still have!) a bootleg album by Yes called Sorcerer’s Apprentice. It was a recording of Yes at the Hollywood Bowl in 1975. Whoever made the record tacked on a snippet of an interview with Jon Anderson:

“Our music isn’t any category. I wouldn’t put it in the category of symphonic rock because that’s not a good word. Symphonic rock sounds like… strawberry bricks.”

I always thought that was a funny quote on face value, but I also liked it because it accentuates the whole craziness of classifying and categorizing music. Remember, we really didn’t call it “prog” in the early 70s; in fact I referred to it as “progressive art rock.”

Tell us about the Strawberry Bricks timeline poster. Is it still available in poster form?

I’ve always liked to think about music in the format of a timeline — when was it recorded?, what albums were peer to it?, where did the artist go from there? Maybe it goes back to an argument I got in in the 7th grade, when a friend suggested that Starcastle was not a Yes clone (of course they were influenced by Yes!). Maybe it was from a thread on an early online bulletin board, Prodigy. Who knows! But with the advent of the PC, I was able to graphically map out a poster of all the records I loved and see how they relate to each other. I sold a lot of the posters, and still have my copy framed in my man cave. I may have a few copies rolled up somewhere.

Many modern progressive rock fans might take issue with your timeline, which ranges from 1967 to 1982. What was the decision behind limiting the timeline to that period?

It’s not so much that I limited it, but that the story for a particular generation of musicians ends in 1982. If there’s one thing to take away from the book, it’s that what we now know as progressive rock was invented by a very discrete generation of men, who grew up in a particular point in time, and mix that all together with their education system, the  technology they had, the instruments they had, and you get prog music. They listened to rock-n-roll at its very infancy, they were excited by the psychedelic era, and they gave us progressive rock. By the end of the 70s, the music changed, because of course, those men changed as well. So the book is the story of that first “classic” generation of men. And without them, we wouldn’t have so-called “modern” progressive rock.

What is new in the Revised and Expanded Edition?

A lot more records in the timeline! It’s been ten years since the first edition, and I’m the first to admit that it was a little on the amatuer side. So I put the work in, fixed what needed to be fixed, had some very generous people help me out, and even hired a professional editor to make the best book I could. With this edition, I’ve cleaned up any and all factual errors and spelling mistakes. I’ve also spent the time since the first one  further researching that era of music — music “archaeology” as I like to call it. I’ve tried to include more albums that draw together the stories of certain musicians and groups, and expand the standard repertoire to be as broad as it can be, yet remain within the guidelines of the “progressive generation.” So it’s a tome at 632 pages, but I’m extremely proud at how it turned out.

What, to you, is the criteria for a good music review? Any tips for those of us who do album reviews?

I’m a big fan of the Trouser Press Guides. I grew up with Circus, Creem, Rolling Stone, etc. Nick Logan’s Illustrated Encyclopedia of Rock was one of the first books I got. That’s what I read and that’s what influenced me. But the key to a good review, in my humble opinion, is to give enough information so the reader can make the final decision on whether they like the music or not. You know, that saying, you can lead a horse to water? The reviews in the book — 476 of them — are also telling a story. So there’s a lot of factual information in them. But I try to be even-keeled with my personal opinion of records, and try to be objective. That’s another reason the timeline works; you can get an idea of what was good about a record by looking to see what was released around the same time.

What do you feel like are the most underrated prog acts from the classic period? Criteria: progressive rock acts that were highly influential and important but not often included among the bigger acts, such as Yes, King Crimson and Genesis.
Difficult question! Maybe it’s the nature of progressive music, but I can easily see why so many bands didn’t make it commercially. In fact, it’s probably more of an anomaly that Yes and Genesis found success in the 80s — after the end of the timeline! But the record industry in the late 60s and early 70s was a cottage industry. If you look at the beginning of the timeline, there were many groups that were given money and time to grow. Mostly, I think it was a crap shoot. I mean, the musicians themselves didn’t even know what kind of music they were going to create! As you read the book, I’ve tried to include as much chart information as I can so you can get an idea of how the music was received back in the day. But as for underrated, I think the best of that generation have all earned their due. Peter Hammill and VdGG, Daevid Allen and Gong, Christian Vander and Magma, Dave Brock and Hawkwind, Michael Rother of Neu!, the list could go on… but they all have the respect of both musicians and fans, and to this day people still find their music exciting to ears of both old and new listeners. That’s success.

Again, it goes back to this theory of mine that progressive rock is the music of a generation. The Portraits give the reader an idea of what these musicians grew up listening to, their education, their lives were, etc., and ultimately that’s why they made the music that they did. It’s their life experience that shaped them and out came progressive rock. I also want to document these stories because as we all know, far too many of this generation have passed on, and I hate to see the stories behind the music lost forever.

What are some of your favorite modern progressive rock bands?

I’m a huge fan of District 97, and Jonathan and I have become very dear friends. It’s almost serendipitous that we are both here in Chicago. Funny story, but it was my wife’s birthday and we were going out, when I saw a band playing at Martyrs (which is just around the corner from where I live) that billed themselves as “Chicago’s finest progressive rock band.” I told my wife, “Well, I guess we’d better go see them!” This was the lineup with Katinka Kleijn on cello. I was blown away. What an amazing group of musicians. Other favorites? Anything that Fabio Golfetti is in (Violeta de Outono, Invisible Opera Company of Tibet, Gong, etc), and Mahogany Frog from Winnipeg. They are long overdue for new music!

Where can I buy the Strawberry Bricks Guide to Progressive Rock?

From any of the Amazon websites http://amzn.to/2yLKnDs or through your local bookseller or record store (ISBN:978-0578189024). Or if you’re in Chicagoland, I’m happy to sell you a copy signed by yours truly!