I have definitely seen more concerts in the last year than I have in my entire life. Part of this, I feel, comes from my immense love of music. Part of it comes as an obligation to support artists that I love. And part of that is my new calling as a Prog Evangelizer, which is one of the main reasons why I continue to work with Proglodytes. Going to so many shows, however, has made me reflect on the live music experience for me. More than anything else, I ask myself: what are the factors that make a show enjoyable, and what are the factors that make a show unbearable?

Going down to Nashville for a few days was really instructional on this topic. Melody and I decided to go down to see A Perfect Circle, but then later learned that Opeth and Gojira would be playing the following night, so we thought, we could stay a couple days and make it a concert week. She has been a fan of A Perfect Circle for many years, and was really excited to see them. I have been a fan of Opeth since Blackwater Park, and Gojira is currently one of my favorite metal bands. A Perfect Circle isn’t my favorite, but I think they’re quite good and like a number of their songs. Both of us were really excited to see our bands.

A Perfect Circle’s opening band was called Prayers, which was a really interesting concert experience. They are an electronic rock duo from California, and are the pioneers of a new genre that they (and the rock press) have termed Cholo goth, that features dark subject matter (they sing a lot about gang violence) and Gothic imagery like upside down crosses and black clothing. The imagery was really interesting and the songs were clearly really emotional and intense, but the music didn’t do a lot for me. That’s OK, though- it was still a pretty engaging concert experience. Rafael Reyes, perhaps known better by his stage name Leafar Seyer, shared that he had lost some dear loved ones a few days before to drugs and suicide, and so while I didn’t totally relate with the music, I could at least understand where it came from, which made the experience enjoyable for me. 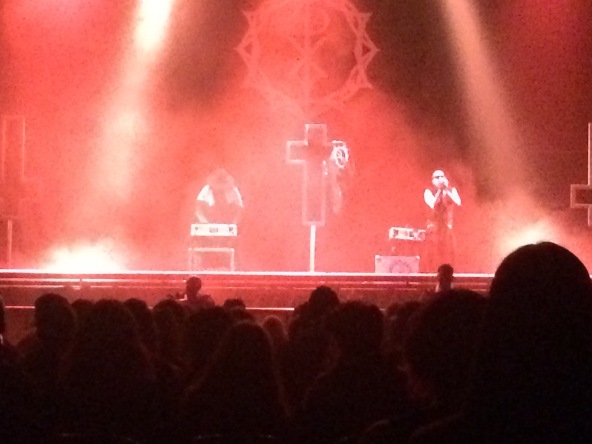 A Perfect Circle took the stage, but they were behind a giant scrim that only showed their silhouettes for the first song. This created a sense of distance already, but I thought it would be really awesome and dramatic if the scrim were to drop and reveal the band, standing there, ready to rock the crowd. When it finally did fall, I saw the band standing on these elevated platforms, and Maynard in the very back. He was barely noticeable- almost still a silhouette still. Throughout the concert, I kept on wondering if he would come forward at all, but in his standard Maynard fashion, he stayed right in his spot, probably enjoying the fact that he was far from the focus of the stage. They played a long set of 18 songs that included some of my favorites (“Weak and Powerless”, “Imagine”, “Counting Bodies Like Sheep to the Rhythm of the War Drums”, and “The Outsider”), and as a band, they were near-perfect. Every note was perfectly placed, and Maynard’s voice rarely strayed from what was familiar. But in the already huge Bridgestone Arena, Maynard’s distance was augmented, and it almost felt like we were watching a rock performance on a distant island. We left that concert thinking that it if that concert could get a grade, it would have gotten a C. Good, but it could have been better.Also, they played a few new songs, which, if I remember correctly, were pretty bad. Melody said they sounded like Puscifer knockoffs, and I agreed. OH- and no pictures allowed. This was enforced pretty strictly. Bummer, but there wasn’t too much as far as a show anyway.

The next night, we went to the War Memorial Auditorium to see Gojira and Opeth. After a bit of an audio-visual journey, Gojira started with “Only Pain” from their new album, which immediately had everyone locked in. The light show started, and it was perfectly synched with Gojira’s intense rhythms. After our previous concert experience, I knew that this concert was going to be markedly different. The band played with as much intensity as I expected- running around the stage, headbanging, sweat. Up front, groups moshed intermittently, but most of the crowd was locked in, banging their head to the polyrhythms. They played a perfect mix of older stuff from the From Mars to Sirius (“Backbone”,  “The Heaviest Matter of the Universe”, “Flying Whales”) and newer stuff from Magma and L’enfant Sauvage (“Silveria”, “Stranded”, “The Cell” and “L’enfant Sauvage” being some of the highlights).

The experience was in my top 10 concert experiences of my life. I could list out the songs I loved- I am a huge fan of Magma and L’enfant Sauvage and love almost every song on both, and I love their back catalog as well- but the concert experience elevated the music in a way that I rarely see in concerts. It added an incredible visual element that was carefully crafted and rarely gimmicky or cheesy, which is tough for even the best bands to do. Every band member gave everything they had. At the end of the concert, Melody (who has seen a number of concerts herself) looked at me and said, “That was the best concert I’ve ever seen.”

Opeth took the stage next. They started out with “Sorceress” from their newest album, and the crowd was mesmerized. Opeth’s concert was markedly different from Gojira, as Gojira doesn’t really do ballads, but perhaps the most impressive thing about Opeth’s set was that we were able to see their diversity and dynamic range. I know that Mikael doesn’t growl anymore on albums, and I was surprised to hear him play some of the older songs and deliver his trademark growling passages. In between songs, he engaged in some charming banter with the audience. While I think that Gojira was the more in-your-face, engaging act of the two that played, I left feeling like I was able to appreciate Opeth on a much deeper level than before after seeing them live. Some of my favorite songs that were played- “Sorceress”, “Heir Apparent” (which was BRUTAL), “Era” (which he said had not yet been played live, and which he introduced as a “cock rock song”), and the set closer, “Deliverance”. 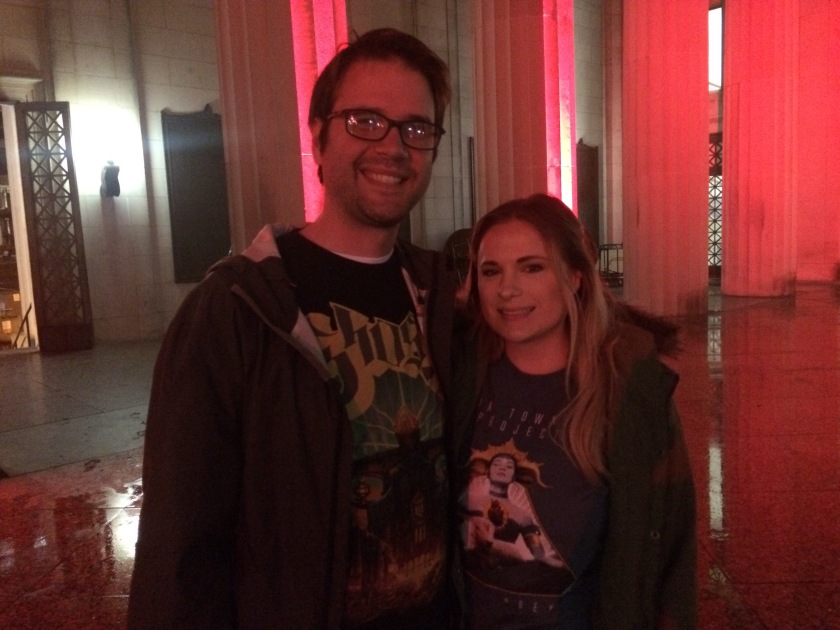 Melody and I talked a lot about why the concerts felt so different, and really, it came down to perceived closeness and energy. For closeness, you could say that the venues made the difference there, as Bridgestone was significantly larger than the War Memorial Auditorium.But I’ve seen bands that can transfer that energy and excitement to an entire arena as if it were a tiny room- Alice Cooper’s live act was a good example of that. So it’s not impossible.  But not only did I feel like A Perfect Circle were really far away, even though we were on the front rows. I felt like they wanted to be far away, and Maynard wanted to be the farthest away. If he was the conduit for the band, he was really muted by the presentation. If the choice to create this distance was intentional, I’m not sure what Maynard or the band were trying to achieve. Gojira and Opeth both managed to create a sense of oneness and closeness with the audience, as they jumped around the stage and spoke intermittently. Also, both Gojira and Opeth had engaging frontmen in Joe and Mikeal (respectively) that channeled the band’s energy and guided the audience through the songs.

To close, Gojira was stellar, Opeth was really great, and A Perfect Circle was acceptably good, but could have been much better. It was still a fantastic pair of evenings, and I left both feeling grateful that I live in such a good era for progressive metal.