This day has been wild. I’ll just start it by saying that by some fluke of the universe, I just got to jam to Beatles tunes with Neal Morse and Brook Hansen at a piano in a small bar. So I’m still sort of in shock… An example of the magic that can happen on Cruise to the Edge. I’ll talk about it at the end. But…yeah.

So I’ll start from the beginning of the day. My roommates and I went to see Kansas do a short acoustic set and a Q&A. They played several songs, among them “Hold On”, which was gorgeous, and the iconic “Dust in the Wind”. Their harmonies were on point. The picture didn’t turn out super well, but it’s the most one can expect from an older iPhone camera. I admit that I’m less familiar with Kansas, but this performance got me interested in listening further. 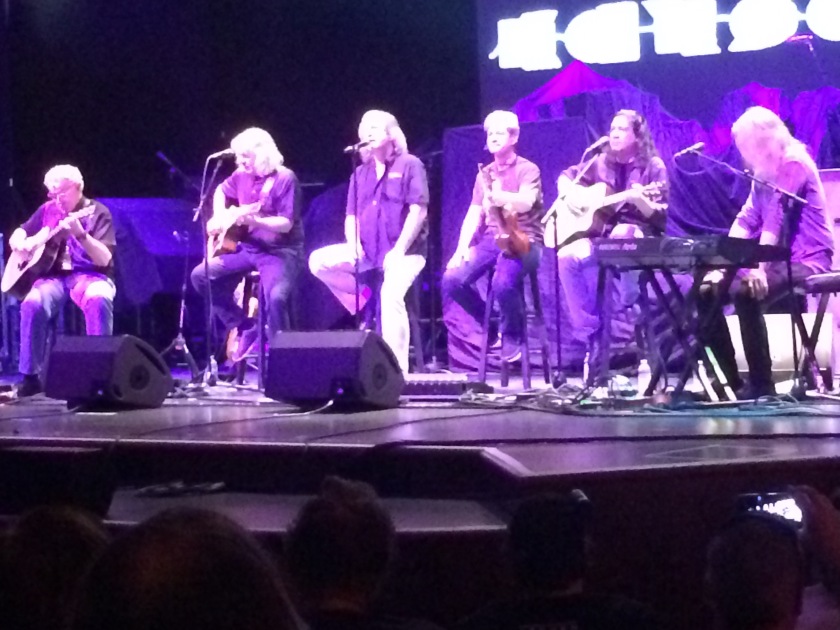 I couldn’t decide what to do, so I wandered between shows. I saw a little bit of John Wesley’s Q&A. I did the Photo Experience, where I got to chat with Pain of Salvation again briefly. In my wandering, I ran into a few familiar faces. Like Randy George from the Neal Morse Band, and Dave Meros from Spock’s Beard. Dave had a minute, so we talked about a few different things, among them a song he wrote that I played at a graduation ceremony for high school (“Ghosts of Autumn”), the band Advent Horizon, and a bit about the new Spock’s Beard. Both were incredibly gracious with their time and very kind. 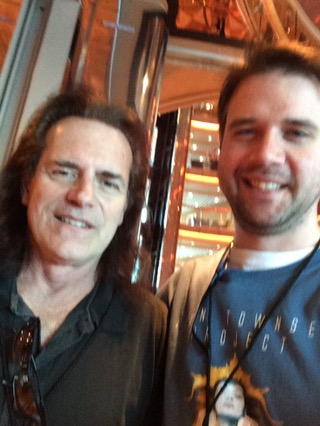 I’ve been a Genesis fan for a long time, so I was really excited to see Steve Hackett in the afternoon. Steve played a few of his songs from his new album, which were really beautiful and diverse. He then launched into old Genesis covers. He rocked the house, with the addition of the tremendous Nad Sylvan on vocals. He played several songs that were less commonly played, like “One for the Vine”, “Afterglow” and even a track from their Spot the Pigeon EP called “Inside and Out”. They also played the classics like “Firth of Fifth” and “Selling England By The Pound”. They even treated us to a bit of The Lamb Lies Down On Broadway with “Anyway”. Seeing Hackett play those songs was a dream come true, and his backup band was intimidatingly talented, especially the drummer (Gary O’Toole).

Craig and I thought we’d pop backstage to say hello after the concert (Craig has known him for years), and I learned that Steve and his lovely life Jo are incredibly kind and gracious as well (are you noticing a theme with famous prog musicians?). It was lovely meeting Steve and Jo. Steve is one of my musical heroes, and I’m super appreciative that he is still writing creative and innovative music, as well as covering early Genesis.

Also on the extremely cool people to know list: I had the pleasure to meet Andre Cholmondeley, who was also a friend of Craig’s. He also happens to be the guitar tech for Steve Howe, Adrian Belew and many other legendary guitarists. He also is apparently a local legend. We had a lot to talk about as he shared industry stories about Steve’s preferences, or playing with Zappa alums, or living a healthy lifestyle (we ran the conversational gamut). He and I chatted about John Zorn, as well as one of our favorite new prog bands, Bent Knee. We hope to have him on Proglodytes Radio in the coming months.

I also got to meet the lovely and talented Leslie Hunt, singer of District 97 (and American Idol finalist!). We talked a bit about the state of progressive rock in Chicago, and I promised her I’d catch their next show closeby. Forgive my double chin here. Leslie instructed me that I can get rid of that by angling the camera up. God bless you, Leslie. Hopefully my chins won’t make any more appearances for the next couple days.

I had dinner with some friends of Craig and Bill, among them Circuline manager Tom Palmieri. We all at the table tried very hard not to talk about politics, and failed miserably, but it seemed like everyone was on the same page, so at least we didn’t argue. Tom and I talked about a massive surprise that will hopefully come about, that I will allude to in this post so that you can make up outlandish rumors about what it could be. We popped outside, just in time to catch Bad Dreams, which was already pretty great, but was made even better by our friend Steve Rothery from Marillion. They played “Sugar Mice” and “Cinderella Search”. Both were amazing and very true to the source material.

Bill and I caught The Fringe, which is Nick D’Virgilio‘s new project. Of the bands I had not heard before the cruise, they were the biggest surprise. I have a big place in my heart for poppy prog a la Kevin Gilbert, and so The Fringe were right down my alley. I will be reviewing their CD soon. I also caught up with Nick to chat a bit. Nick is the man. 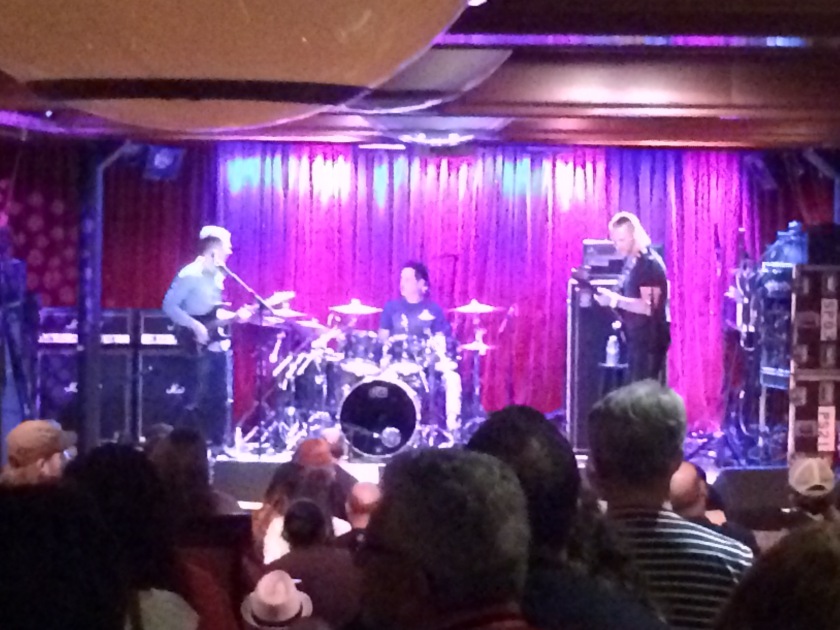 On our way to see The Stick Men, Bill and I spotted Neal Morse and Brook Hansen jamming in a bar. We stopped by and listened for a bit. Neal started playing Beatles tunes, and asked if anyone could sing high harmony. Having sang many Beatles tunes hundreds of times throughout my life, I popped up my hand and said “I can sing high harmonies!”. Neal asked me what songs I knew, so I ended up singing 3 songs with Neal and Brook- “When I’m Sixty Four”, “Lovely Rita”, and “Hey Jude”. I magically forgot the words a couple times, even though I remember all of them now, and a very kind and supportive audience helped me along. Getting to jam with those two phenomenal musicians was a totally surreal experience that I will never forget. If either of you read this, God bless you both!

I stuck around in the bar area, and popped in a venue just in time to hear Yes‘s lead singer Jon Davison sing an incredible rendition of  “The Musical Box” by Genesis. Listening to folks jam to prog classics was a great way to close the night.

I wanted to end this with something I should have done days ago-show you some of the friends I’ve made from all over the world!

Here are Zane and Wendy- I started talking to Wendy because she had an awesome Gentle Giant shirt on. Zane was also in the hallway, so we discussed prog for a bit! Lovely folks from the US.

Tiago and Rafael are two excellent dudes from Brazil that I met on the first day. They schooled me in Brazilian politics and chatted about prog. Solid dudes! 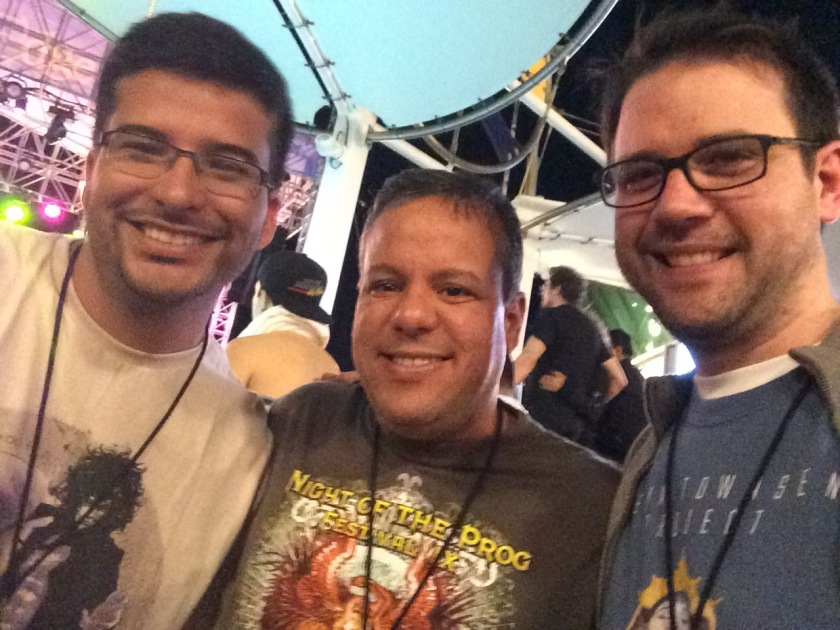 Dave and Emma were at dinner with me, along with Julia (who was not pictured). They were in line to see IO Earth at midnight, and were totally ready to rock, even if it meant staying up late. 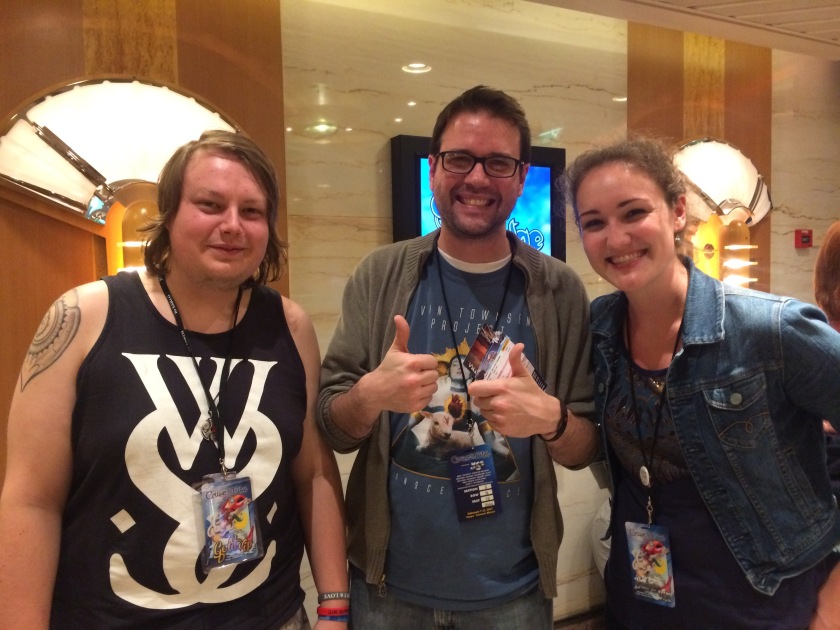 Mercedes was representing Venezuela at Cruise to the Edge, along with a few others. We talked Latin American politics, family, prog- you know, the normal stuff. 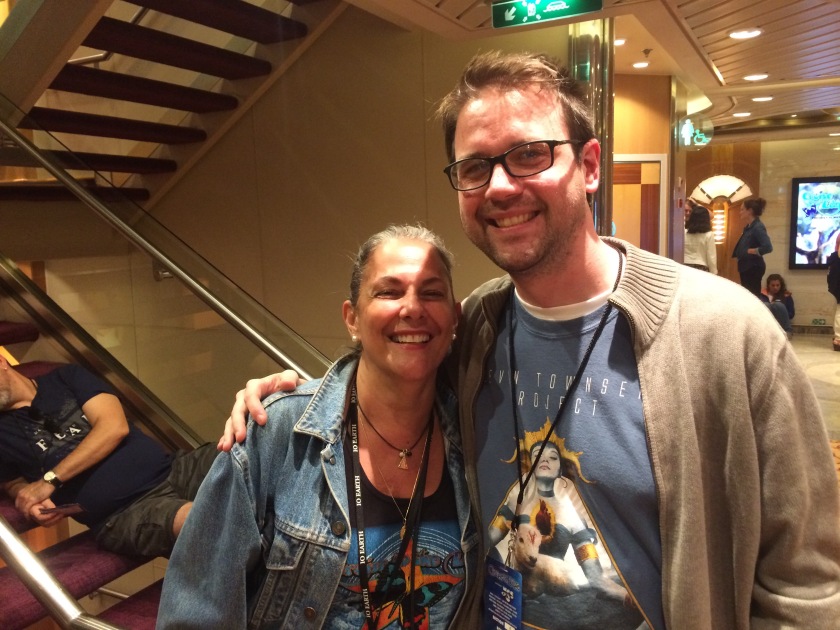 This concludes Day 2! It’s been a phenomenal day of meeting my idols and listening to fabulous music. Who knows what surprises Day 3 will hold. Signing off at 2:22 am – Thomas.