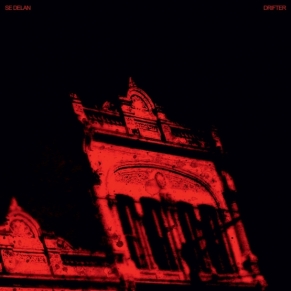 When I tell you that something is ‘off’ with Se Delan’s new album, Drifter (affiliate link), what I’m saying is that the duo has likely accomplished precisely what they set out to do.  Se Delan consists of Justin Greaves (Crippled Black Phoenix) and Belinda Kordic (Killing Mood), and with their second album, the pair have created a very dark, alternative meets new wave, album that creates a soundtrack for its own horror show.  For those familiar with their first album, The Fall, expect a much darker take on their slow Mazzy Star-esque dreamscapes.

There is an inescapable sense that something very wrong is going on in the album.  The rhythms are too deliberate, almost like a gallows march; the instruments tuned-down too low; the vocals too sweet, sounding like something you’d expect in a Japanese horror film that takes place in an insane asylum.  With vampires.  The lyrics reflect this sense of instability: “I’m okay, I’m not alright” Kordic sings in “All I am”, one of many songs that seem to be exploring the frayed ends of sanity.  But sometimes very wrong can be right, and it is clear that Greaves and Kordic have a destination in mind, and know exactly how to get there.

Despite musical credits only going to two individuals (and 1000 ravenous skulls), the sound is full and densely layered, (un)happily filling up a room when played to appropriate volume.

If there is a critique of the album, it is that the sonic palette does not vary enough from track to track, making it difficult to really take a single track and play or critique it outside of the context of the rest of the album.  That said, taken as a whole, the album is extremely evocative, almost cinematic, and well worth a listen with the lights down and the volume up.