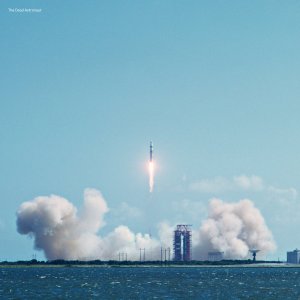 James McKeown adopted ‘The Dead Astronaut’ as his pseudonym as a nod to J. G. Ballard, an author best known for dystopian novels and short stories in the science fiction genre. Ballard’s short story, “The Dead Astronaut” is a description of a married couple waiting for the remains of a deceased astronaut to return to the earth so that they may be properly buried. In the story, the concept of space exploration is juxtaposed with the near mania of the wife as she awaits the body of her (perhaps) lover.

Juxtaposition of outer space and inner space is at the heart of The Dead Astronaut’s self-titled album. As such, it is not a surprise that the album flows gently from song to song, the music never revealing any sharp breaks. It is easy to recognize that the album is a solo work, with McKeown (also a member of Hi Fiction Science) clearly having complete control over the direction of the album. While the album doesn’t display the musical elements that one typically presupposes for a progressive rock album (long songs, complex meters, instrumental noodling), it is very true to the fundamental idea of progressive rock that the music takes the form that the composer feels best expresses his ideas.

The Dead Astronaut feels like a very personal expression, at times the vocals almost seem to tremble under emotional weight, and the production has a very homey and intimate feel to it. This said, the contributions of Charlotte Nicholls and Pete Judge on cello and trumpet, respectively, are crucial. With an album as low-key as this, the instrumental color added by the cello and trumpet parts is essential to prevent monotony, particularly where McKeown has largely eschewed all percussion, resulting in a rhythmic consistency that makes the album difficult to think of as anything but a single unit, one song blending into the next. The one exception to this being Skyboat Reprise, an instrumental jam near the end of the album, which stands out among the other tracks as fun and rhythmic. My one criticism of the piece would be that I think it might have fit nicely earlier in the album, perhaps marking the mid-point.

As with many albums that have something more to offer than a series of hooks, The Dead Astronaut rewards repeated listening, most effectively in quiet and dark spaces where distractions are minimal.

With obscure artists, it becomes obligatory to provide artists for comparison so that fans of one might be encouraged to check out another. McKeown himself cites Love’s Forever Changes, The Zombies’ Odessey And Oracle, Curt Boettcher/The Millennium, The Left Banke, and early Gravenhurst as musical reference points. Comparisons more familiar to readers of this blog would be Bruce Soord’s recent solo album, and the mood conjured by the mellower moments of Antimatter.

Readers can check out the track Skyboat on soundcloud here: https://soundcloud.com/tonefloat-records/the-dead-astronaut-skyboat

The album is available on 180 grams black vinyl (with a wonderful Carl Glover designed sleeve) from most main online outlets and direct from the Tonefloat shop: http://1185600.mijnwinkel.nl/the-dead-astronaut/p-1a/LPTF158.html