Evership is a band to know. After releasing their self-titled debut album to wide acclaim, they were invited to RoSFest to perform, and then announced for ProgStock 2018 soon after. We had the amazing opportunity to speak with Shane and Beau on the Proglodytes Radio Podcast, and were able to get more insight into the stories behind the songs. But, though it comes late, we figured we would release a review, because it’d be impossible to say enough good things about Evership and their debut album, which was easily one of the best albums of the year in 2016, and maybe one of the most impressive debuts that we’ve ever reviewed at Proglodytes (though Earthside might come in a close second).

“These songs are life-stories, I can’t tell them in three-and-a-half minutes.” This sentence from Evership mastermind and multi-instrumentalist, Shane Atkinson, sums up their debut album perfectly.  The maturity of the sound is something you don’t often get on a debut, and it hints at the collective experience of the musicians who created it.  This is prog through and through, to be sure.  But the overall sound comes across far more like the prog bands of the 70s;  rock bands who were progressive, but they didn’t really think of themselves as “progressive rock” at the time.  They were just trying to make the best rock music they could while pushing the envelope of artistic expression.  Evership really just sounds like good music.  Music put together with great care leaning into perfectionism.  And the result is art too grand to be contained in a simple song structure.  These are life stories. 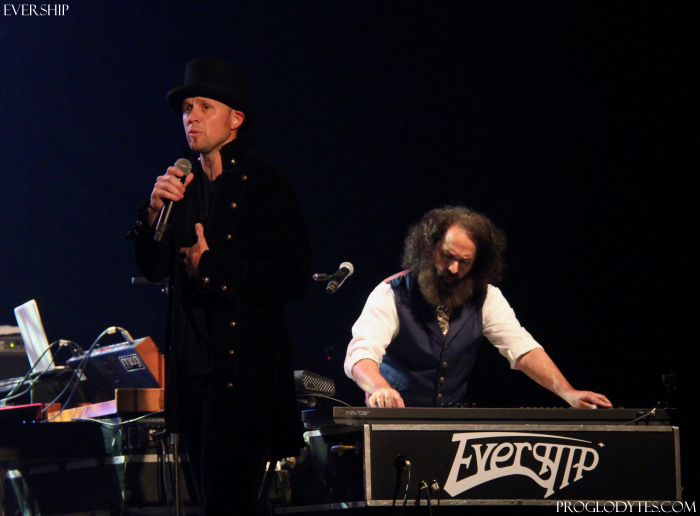 You won’t find any singles on this album.  But if you’re not ready to commit to a 15 minute epic, take a listen to the opening track, “Silverlight,” as a starting point–clocking in at a mere 7 minutes.  While Evership already have a voice all their own, this track reminds me of the great commercially-viable 70s prog bands like Styx, Kansas, and Queen.  “Silverlight”, on the surface, is the story of a man who is struggling with his secret self (who turns out to be a werewolf), but the deeper meaning of the song is revealed on subsequent listens. This song features lush harmonies and some fantastic Wakeman-esque keyboard work.

The next track, “A Slow Descent Into Reality”, is an impressive musical and artistic statement. Clocking at around 12 mins 30 seconds, it is a multi-part epic with some incredible musicianship. Singer Beau West is the most valuable player on this track, powering through the changes and singing with strength and passion. One of the many chill-inducing sections on this album happens around 10:16, when Beau sings, “There must be something beyond me!” in full voice at a very high pitch, as his voice blends into the background.  This moment leaves the vocals so raw and exposed that you’d think it must have taken many tries to nail it the way Beau does on the album.  At yet it was done in a single take, as Beau revealed on our Proglodytes Radio Podcast interview.

Though all the tracks on the album are strong, my personal favorite is “Ultima Thule”.  This song is a slow burn.  It didn’t immediately stand out to me on the first spin, but after multiple listens it opened up like a fine wine.  Soon I found that I just couldn’t get enough of it.  On the surface, it tells the story of a sailor seeking treasures that await him beyond the horizon at the ends of the earth and the young bride he leaves behind who waits for him.  The title of the song comes from ancient Greco-Roman cartography, where Thule was the farthest northern island, possibly Greenland or Iceland on modern maps.  In classical and medieval literature, the term “ultima Thule” (literally “farthermost Thule” in latin) was used metaphorically to mean a place beyond the borders of the known world.  Shane uses this story as a metephor for man’s foolish search for perfection, being lured away in search of the “ultimate” as it were, despite the perils he faces and the people he neglects and leaves behind.  This is a message that resonates with me.  And with respect to the lyrical denotation–sirens and maelstroms on a journey beyond the known world–if that isn’t prog, I don’t know what is!

Musically, “Ultima Thule” builds in parallel with the mounting urgency of the lyrics.  From a delicate hum rises gentle acoustic guitar and vocals.  As the sailor of the story faces ever greater peril at the ends of the world, the various instruments and vocals build to a powerful din.  Eventually, the narrator makes a revelation:  “Are these tales of caution and mercy to be believed?  How can one know, but that it was me!”  With that, the music fades to a recapitulation of the intro, and you get the feeling that the perennial quest for the ultimate begins anew.

To close, Evership’s incredible debut is a triumph on every level. Every song on this album is memorable, both musically and thematically. The words, though eloquently sung, reveal deeper meanings with subsequent listens. The musicianship on this album is stellar, with all pistons firing throughout. My only criticism is that I’m completely hooked, and now I have to wait for more material from this exciting and exceptionally talented new act.

Catch Evership at ProgStock 2018, and buy their album here.