One of my favorite finds last year was the brilliant Heterotopia, an ambitious, melodic, multi-layered concept album written by composer/musician Lainey Schooltree. Her band, Schooltree, won a Progressive Music Awards Readers Poll for Best New/Unsigned Band, and the highly acclaimed Heterotopia made it onto numerous Album of the Year lists, including ours here at Proglodytes. Schooltree’s music manages to be highly philosophical and thematically dense without being overly pretentious, and most importantly, the songs are catchy and very well crafted. As you can see, we can’t say enough good things about Lainey and the gang.

Next week, Schooltree will join several other terrific progressive bands (including District 97, Laura Meade from Izz and Hypaspace) at the Women of Prog Rock 2018 concert at the Regent Theatre on May 9th. We are thrilled to chat with Lainey about Heterotopia, the future of Schooltree, the state of modern “progressive music”, fantasy/sci-fi fandom, and artists that inspire her.

Heterotopia just barely turned 1 last month. Heterotopia is a hero’s journey, but it is clear from press and interviews that the production of the album was an arduous journey for you, worthy of a Tolkein-esque retelling. Now that you have a bit of distance, what are some of your thoughts and reflections about the making of the album?

What happened to opening with a softball, Thomas? Haaaa. I’ll be real with you, I’m still recovering from wrecking myself during production and the cascading body disasters that ensued. Which seems insane over a year later, but it’s true. Creating HT was a deeply cathartic experience for me and one that I’ll treasure always, but there were a lot of twists and turns I wasn’t ready for. Not unlike Frodo, I guess. Some days I still feel the scar from Weathertop and just want to Uber to the Undying Lands.

Ask me again in another year?

It helps to be able to see the project through others’ eyes, though — it makes my day whenever I hear from someone who’s been affected positively by Heterotopia.

You have a concert coming up next week at the Regent Theater, titled Women of Prog Rock 2018 (Click here for tickets). Your band, Schooltree will be sharing the stage with some other great female-led acts: District 97, Hypaspace, and Laura Meade from IZZ. Who are some of the women in progressive music (or other styles) that have inspired you the most creatively?

Kate Bush is a favorite. She’s such a unique creator, and she truly kept it weird in the face of her huge commercial success. I totally wanted to marry Tori Amos as a tween, but basically broke up with her when I discovered Kate, who I (at the time) considered the true original. I’ve actually been revisiting Tori’s stuff as part of some soul searching lately… There’s some good shit in there, but man, her lyrics make absolutely no sense a lot of the time. I remember puzzling over them as a kid. I think that’s part of why I work so vigorously at my lyrics, so they can be enjoyable for those who puzzle. Laurie Anderson, Joni Mitchell, Erykah Badu, PJ Harvey, Bjork, Happy Rhodes, Esperanza Spaulding are some other women whose work I’ve found inspiring.

Tell us as much as you can about what Schooltree is working on!

We’re working on a new project and a new sound. Musically I’ve been interested in energy, what’s happening when you listen to music that makes you want to move. Learning about electronic production and synthesis. Finding inspiration in jazz fusion, dubstep, edm, funk, vaporwave, yacht rock… there’s probably more I’m not remembering. Conceptually I’ve been getting into futurist themes, research has had me reading up on tech and science news, learning about things like neural networks, blockchain technology, the internet of things, smart cities… trying to build a solid foundation for a scientifically plausible future as a setting for the current project. As an artist and a human I feel like I’ve spent a lot of time looking backwards; there’s a big challenge for me in thinking about the future, personally, socially, technologically. It’s shaking up my habits and assumptions, which kinda sucks sometimes but feels vital to making something truly new.

Tell us about your new band members? Has writing for the new album been more collaborative?

The new line up is actually astounding. I don’t usually use the word “blessed” — because y’know, people who use that word — but, #BLESSED. These guys are not only absurdly talented and game for anything, but they’re also just super cool humans. So far writing has been the same process of me making demos of new songs and arrangements and bringing them to the band for us to work on together. Everyone has ideas, though, and things are about to get pretty interesting in the band. I think the actual translation of the new material will be highly collaborative, since we’re trying to create this new sound, and in some ways, a new band.

Progressive rock is often condescendingly described in press (like this Atlantic article) as the preferred genre of white, middle aged males. Do you see positive trends that show progress and diversity in progressive music? How could prog do better in this area to not inevitably give off that vibe or reinforce that stereotype?

I guess one question I have is, who actually has the power to determine what is “progressive?” I don’t have the answer. I think there’s probably more than one.

Second question is, how much does that matter?

There’s a range of self-identifying prog fans, from purists extolling classic conventions to those with more expansive, flexible conceptions of the genre; lots of debate flows from that rift, but it generally falls within the expected confines. Like other art forms and fields in the 21st century, one of the things on the table for the ruling class during social change is relevance; the time for inclusivity as a choice is coming to a close as important social movements (Black Lives Matter, Time’s Up) promote wider understanding of the dynamics of privilege. People of color and women comprise many renowned hip artists and influencers. There are certainly people from various backgrounds making music that qualifies as prog. Whether they choose to identify that way, though, will depend on whether it’s desirable to do so. You and I have talked about wanting to see a rebranding of sorts for prog. Personally I’d like to see it framed as the set of musical preferences chosen by badass rebels who subvert consumerist norms by embracing (and ideally pioneering) unconventional complexities across genres. A take on the rock-n-roll spirit, prizing innovation and experimentation. And since it’s almost sorta kinda cool to be a nerd these days, there’s some hope for popularity (or at least reducing the stigma).

Another thought is that we’re moving toward a more fluid use of genre (not unlike other social paradigm shifts happening right now), which contextualizes how musicians identify. “Progressive” is increasingly likely to be applied as part of a set of descriptors than an identity. It’s less a thing you are and more a thing you do. I think that’s ultimately a good thing for culturally decompartmentalising it. Barriers are being broken down, man. It’s an exciting time to be making stuff, for all its challenges

Who or what has been inspiring you artistically, as of late?

Knower changed everything for me. Louis Cole is a monster. Thundercat, Everything Everything, Robert Glasper Experiment, Mutemath, Snarky Puppy, and Flying Lotus are all rocking my world right now.

What is your dream collaboration?

I’m back in high school, but it’s also the mall, making sandwiches out of rainbows with Thundercat and Bob Odenkirk. And I can fly. 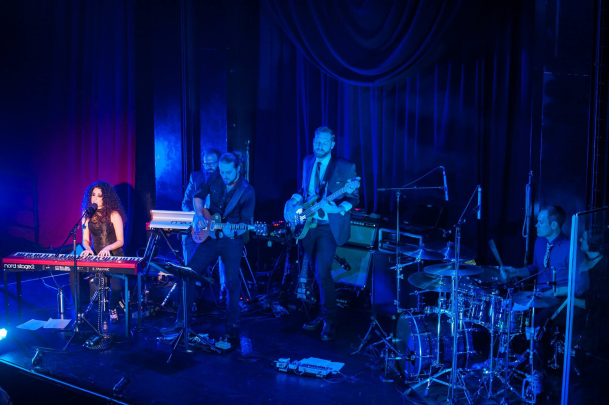 Will Schooltree be doing any more live shows this year?

Yes! We have a couple shows in Boston planned for summer and fall, and we’re currently working on a Canadian tour around Labor Day. You can stay tuned to our site for the deets. (link: http://schooltreemusic.com/shows)

If you were a superhero, what would be your superpower? Who else would be on your superhero team?

Not everyone knows this about me, but I actually have a dog-like sense of smell, which doesn’t really help anyone, especially me. My teammates would def have to be vetted for hygiene.

Do you think Starfleet’s Prime Directive was a rule that was made to be broken? Also, Bang/Marry/Kill between Spock, McCoy, and Kirk.

Literally yes, considering how many times it was broken throughout the series!

How could you ask me to break up the impeccable trifecta of the human condition personified? Logic’s tenuous dominion over passion, empathic excellence, courageous high-risk high-reward leadership… to bone, wed, or murder any one of them would be sacrilege! That said, I’d prob bang, marry, and then kill Kirk, because that’s pretty much how my relationships go.

If you had to live in one fictional universe, which one would you choose?

The Buffyverse, but only if I get to be Buffy.

Go see Schooltree, along with several other amazing progressive rock bands, at the Regent Theater on May 9, 2018. If you haven’t already, do yourself a HUGE favor and buy Heterotopia from Schooltree’s store. And stay tuned for new, amazing things from Schooltree.

2 thoughts on “Interview with Lainey Schooltree”