Prog Redemption is a special Proglodytes series for albums that didn’t get the respect they deserved in their time. The Shaming of the True  is considered to be a masterpiece among many progressive rock musicians and critics, but I still run into people all the time that are unfamiliar with this work of art. So, I decided to write this article to let everyone know why I think it’s one of the best modern progressive releases, and deserves an effusive, 17 year late review. 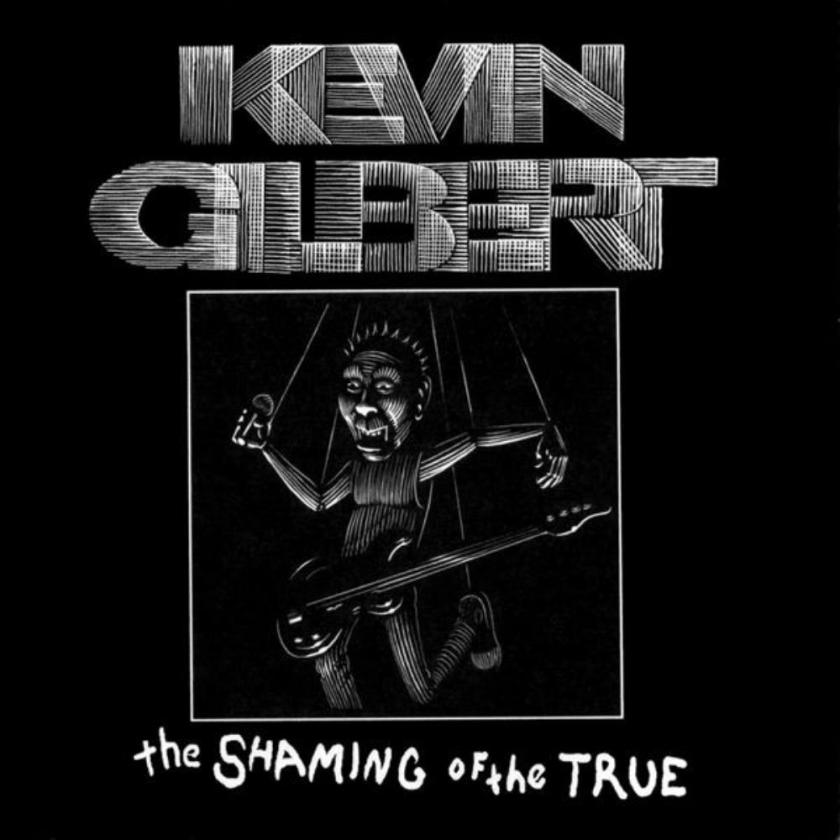 It was 17 years ago that The Shaming of the True was released. I remember it generated some discussion among the various message boards I frequented, but I don’t remember it being released to much fanfare outside of certain circles. Kevin Gilbert wanted to write a rock opera based on his life and the stories he had seen, and so he wrote an outline of a story about a young, talented, obsessive musician named Johnny Virgil. Virgil quickly becomes a star after numerous personal and artistic compromises, only to be chewed up and spit out by the fame monster. Kevin passed away in 1996, before he could finish the album, but the parts that he left behind would become the basis of the final product. The album was released in 2000 as a limited release through Kevin Gilbert’s estate. It was an instant classic among critics and fans. The Shaming of the True is hilarious, offensive, thought provoking, tragic, and so many other things.

Nick D’Virgilio, who many know as the ex-drummer and later frontman for Spock’s Beard and current drummer for Big Big Train, was instrumental in bringing The Shaming of the True to all of us. Nick did an interview with The Prog Report last year (click link to read) where he talked about how the storyline had been in Kevin’s mind for many years. “He had been working on that record for years before I ever met him. He had some songs from way back when he was in Giraffe that he reworked for that record. So I’m sure he had the story in his mind for a long time. And then as certain life experiences he went through, prior to me ever meeting him, he got inspired to write more tunes and to sort of try and start fleshing out the story of the whole thing.” After some nudging from Nick, Kevin was convinced to make some progress on the album, but was ultimately sidetracked by his sardonic, hypersexual industrial project, Kaviar.

Kevin was able to chart out the basic idea of the album, as well as record several instrumental and vocal tracks, before his untimely and tragic accidental death the following year. Kevin Gilbert’s manager, Jon Rubin, sought to bring this project to the world, with the help of friend and bandmate, Nick D’Virgilio and engineer John Cuniberti. This small team looked through Kevin’s mess of notes and were able to create a patchwork quilt from all of the different parts that Kevin left. While it was Kevin’s baby, and much of his original tracks were preserved, it’s clear that without Nick, John, and Jon, this album would have never come to light, so I am truly grateful for their work on Kevin’s behalf.  They pored through countless tapes and recordings and notes with care and attention to detail to create a product that close to Kevin’s vision for the project.

The album itself begins with the naive and eager “Parade”, where we are introduced to our flawed hero, Johnny Virgil, who represents any young person who has ever ideated fame or imagined themselves in front of massive, rabid crowds. His eagerness is sweet and relatable, as he talks about how his heroes will one day know his name. It doesn’t take long for Kevin’s trademark humor to ruin it all, with the acerbic “City of the Sun”, where Johnny meets a gas station attendant on his way to fame, who talks about the hit song he had written back in the day. The grandeur of the chorus is interrupted by Johnny’s conscience, who, as the album progresses, becomes a quieter and quieter voice. The song ends with a preacher, screaming a sermon about some sort of prosperity gospel, and Johnny’s conscience returns, not to be heard again.

“Suit Fugue (Dance of the A&R Men)” is a ridiculously complicated musical track that features Kevin playing the role of several A&R men in brilliant counterpoint, all competing for Johnny’s attention, in an intricate fugue (thus the name). At first they sloppily bid for his attention (“You remind me of myself” or “You sound like Air Supply meets GWAR…in a good way”). It doesn’t take very long for the words to become urgent, as Johnny is encouraged to take a vacation, dump his band, etc. After an outro of wild circus music, the song “Imagemaker” kicks in. “Imagemaker” is a straightforward rock song with smarmy speak-singing. This song  was written by Kevin years before, with his band Giraffe.

“Water Under the Bridge” is a gorgeous, contemplative song about the dangers of artistic compromise. Coming from someone like Kevin, it almost hurts to hear- lines like “what’s a drop of water in an ocean of compromise?” The next track, “The Best Laid Plans”, is a bit more fun.  While many of these songs seem to follow the story of the fictional Johnny Virgil,  “Best Laid Plans” is a purely autobiographical song. He even includes a character named Leo the Lion, who represents his former songwriting partner/producer, Pat Leonard, who “reclines on the throne that was built by the boys in the band”. It’s too spirited to be purely bitter, and more just encapsulates the madness Kevin perceived and felt during his days with his pop-prog outfit Toy Matinee.

The next song, “Certifiable #1 Smash”, is hilarious, and it is also likely one of the most obscene prog songs ever written. If anything even comes close, I’d be curious to know. Kevin gives instructions on how to write a hit song that include things like “sadomasochistic latex sex”, “Tonya Harding nude”, and of course, “an OK from The Pope”. The middle section of the song is spoken word, and…well, I’ll let you listen to it yourself. It’s pretty much a filthy parody of Madonna’s “Like a Prayer” video (if you youngsters don’t remember the reference).

The audio on the album was taken from one of Kevin’s live performances. The live band for this version (Thud) features some accomplished musicians you might recognize- Nick D’Virgilio (Big Big Train, ex-Spock’s Beard) on drums, Dave Kerzner on keys, and Russ Parish (Steel Panther) on guitar. This song is followed by the more somber “Staring into Nothing”, where Johnny realizes that fame hasn’t cured his emptiness. It features one of my favorite lyrical passages:

“Fun” seems to be almost a parody of another song he co-wrote with then-girlfriend Sheryl Crow, “All I Wanna Do”. It details a sleazy party, complete with STD rumors, tons of drugs, and people who are desperate and willing to do anything to be famous. There are some terrific one liners in this song- “We’ll play the new Madonna where she rips a fart/And then sit around and talk about why it’s art” is my favorite. From this song out, the album takes a noticeably darker tone,  as Johnny descends into nihilism, with the harrowing “From Here to There” and then with the deranged rantings of “The Ghetto of Beautiful Things”. He snarls, “Sometimes you gotta climb up real high, and it’s scary/ Just to paint the big letters that say ‘One Day Only’.” Nothing encapsulates the angst more than the midsection, where Kevin screams “Fuck em’ all, this is art!”, before he “slides down to Hell on Satan’s sled”.

“A Long Day’s Life” is a heartbreaking ballad of self realization, as Johnny cries for help as he metaphorically drowns. This is one of Kevin’s best tracks, with a strong, beautiful melody and powerful lyrics.The next track,”The Way Back Home”, offers some insight about finding purpose and meaning, and the album ends as it begins, returning to the opening theme of “Parade” with “Johnny’s Last Song”, as a old, worn out Johnny sings again with his acoustic guitar to the backdrop of rain and train whistles. Johnny ends the album with the invitation to his listeners, “Believe in what you’re doing, remember who you are, and who knows where you’ll go.”  It’s worth noting that this invitation doesn’t promise fame or existential meaning. It simply says, “If you think it’s worth it, give it a shot, and who knows?” It might be everything you hoped, or it might be a huge disappointment. Give it a shot anyway?

This piece feels a little weird to write, because this album is really highly regarded among critics and fans.  The deluxe edition was even nominated for a Grammy award. But, I digress. From song to song, it’s not a musically perfect album. The production doesn’t always feel consistent, and there are some moments that feel unusual to (the two back-to-back spoken word parts in “Long Day’s Life”, for example), but if there are weaknesses, then I have to acknowledge the challenges of posthumous production could definitely factor in. The production team that assembled this album posthumously wanted this to be Kevin’s album, so many of the quirky or odd stuff throughout the album were kept to preserve his original product to the extent that they could. Regardless of these slight imperfections, the album is quite an achievement, as it tells a rather cohesive story, with relatively consistent production of material that spans decades. The fact that this album was assembled posthumously is a powerful testament to the strength of the songs and the overall concept.

Concept albums are tough to pull off for a lot of reasons. They’re often cheesy and overblown, and it’s hard, even for masterful musicians and songwriters, to tell a story musically that isn’t stupid or cheesy or awkward. Even the best concept albums (The Lamb Lies Down on Broadway, Metropolis Pt.2: Scenes From a Memory) get pretty convoluted in parts. But the story of Johnny’s rise and fall is pretty easily understood from song to song, partly because it’s a familiar tale, but also because Kevin Gilbert was an incredibly talented songwriter. The album is overflowing with humor and dark ruminations and hard-earned wisdom. Kevin uses Johnny to tell his own personal story, which is the story of so many artists and musicians in this modern age, and it’s told masterfully. I’d even venture to say that it should be required listening for anyone who wants to choose the path of an artist.

I hate to end this piece with a cliché, but the world lost a true genius with Kevin Gilbert. His lyrical ability, humor, and musical talent endeared him to many prog fans all over the world. Fortunately, we are able to experience parts of his life vicariously through this album and his remaining body of work. If you haven’t heard this album, make it a priority, and then go back and listen to his other albums (Thud, Toy Matinee, and everything else).